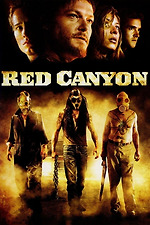 Red Canyon, Giovanni Rodriguez’ directorial debut, is a redneck slasher flick about two siblings who return to their desolate Utah hometown following a trauma eight-years earlier. Attempting to find closure they return with their friends only to discover a gas mask wearing killer is out to get them and anybody else who gets in their way. Whilst the synopsis makes Red Canyon sound like a conventional slasher movie it does throw in some more novel elements, unfortunately they are added with little care and often ruin the horror and credibility of the rest of the film.

Regina (Christine Lakin) can’t remember the horrific events that she suffered eight-years earlier but returning home awakens snapshots of memories. Why she would want to come back is anybody’s guess and the film does a poor job of delivering a rational explanation for this. Rationality in horror is not always a necessity (watching Italian horror from the ‘70s is evident of this) but Red Canyon pushes credibility to breaking point, particularly the film’s climax which is cheap, nasty (unfortunately not in a good way) and silly.

The film feels rather disjointed, perhaps to accentuate Regina’s fractured memory, but ultimately it comes across as messy with too many disparate elements vying for attention. The fact few of these components are handled well doesn’t help either whilst the characters remain vague and poorly developed. It makes moderate use of the foreboding landscape, even if the grimy cinematography is rather ugly, and the moments of violent horror are well executed. Unfortunately, it is such an unsuccessful story that these positive elements can’t compensate for such messy execution.