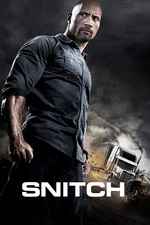 Snitch is a film that strives for earnestness but flounders due to its ridiculous dour tone and simplistic moralising. Opening with the ominous disclaimer that the film is inspired by true events, the film takes the loosest threads of a real story and creates a preposterous action-thriller for Dwayne Johnson to flex his muscles and his limited range as an actor.

Johnson stars as an estranged father who goes undercover for the DEA in order to save his son from a ten-year prison sentence after he takes in a drugs package for a friend. Johnson, without his usual shit-eating grin, is a businessman driven to extremes to protect his innocent son from a draconian justice system. Working as a courier for a Mexican cartel he soon shoots up the ranks whilst placing himself and loved ones in danger.

Despite director, Ric Roman Waugh (Felon), aiming for a serious tone it is hard to believe anything in such a far-fetched story. Everything from the brokered deal he makes with Susan Sarandon’s DA to even Barry Pepper’s laughable beard makes little sense. Perhaps if the film had a lighter tone, and Johnson possessed his trademark sparkle, the film’s ridiculous developments may have been more forgivable but the po-faced pomposity makes it a tough watch.

Although the film attempts to tackle current social themes such as the war on drugs and harsh prison sentences it simplifies the subject matter to the point that any message is practically redundant. To expect a Dwayne Johnson thriller to tackle the issue with any depth is obviously foolish but it would have been preferable if they hadn’t even tried.

Taking an age to get going and then rarely entertaining on any meaningful level, Snitch is a strangely inert experience that is devoid of the tension you’d expect given the situation Johnson finds himself in. Naturally there are the ubiquitous shoot outs and car chases but they are few and far between and hardly handled with any real competency. Even Johnson is flat, constipated by over-earnestness and a lack of character development. Sadly, his co-stars - a strong cast of character actors - are done an even greater disservice by such a farcical script.

Here There Be Tygers