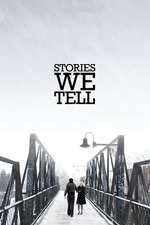 Stories We Tell is a moving and incredibly candid family portrait as filmmaker, Sarah Polley, explores the mysteries surrounding her mother. Beginning as a rather traditional biography of her late mother it gradually transforms into a far richer documentary that touches on identity, memory, the fallibility of truth and the power of storytelling to create a deeply personal yet universal work.

As with all the best stories it is better to experience Stories We Tell with as little prior knowledge as possible. Yet whilst the film’s narrative takes a series of surprising diversions and features several revelations there is something refreshingly ordinary about this personal discovery. One of the contributors even questions why other people would be interested in their family story but it is in this relative normality that Polley teases more compelling themes. In fact the personal revelation that drives the narrative forward is treated with a refreshing matter-of-factness rather than a devastating centrepiece used to shock the audience.

Stories We Tell success lies in its even-handed approach and the way it explores the unreliable nature of memory and the elusiveness of truth - after all truths such as these are always passed through a filter of personal subjectivity and failing recollections. With the one person able to provide the most definitive account - Sarah Polley’s mother - absent from the film it is up to the filmmaker and family to reconstruct the past. Naturally, it is impossible to truly do so and the film freely admits how elusive this goal is.

Despite the film touching upon such weighty themes as identity (after all it is a film as much about Sarah as it is her mother), memory and the collaborative embellishments of storytelling it always remains light and engaging throughout. Polley constantly pulls back the curtain to reveal the filmmaking process surrounding the candid interviews. Whilst it could be accused of simple gimmickry it seems natural and fitting to see how a story about stories would be constructed, particularly when its director is so intrinsically linked to the material.

It is testament to Polley’s sensitivity and honesty that such a personal subject matter neither feels exploitative or self-indulgent. She is intimately connected to the stories that weave in and out of the documentary yet remains impartial enough to allow each party, from family to close friends, to provide their own interpretations of the events. Whilst the film could have so easily ended up as cheap therapy for its filmmaker she manages to find universal connections that help make the story mean something to those outside of this intimate circle of people.

Stories We Tell is a thoughtful, bittersweet and intimate documentary that transcends its limited focus.

Treasure of the Bitch Islands

Sinbad and the Minotaur