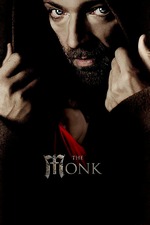 The Monk is a Gothic morality thriller about a respected monk, Brother Ambrosio (Vincent Cassel), who struggles with temptation and is lured by Satan until his very soul is lost. Based on the lauded 1796 novel by Matthew Lewis that has influenced countless films and directors, this is a cautionary tale about good and evil that is laden with heavy handed metaphor and ruinous portent.

Directed by Dominik Moll, a filmmaker with an interest in suffocating chamber pieces (from Harry, He’s Here to Help to Lemming), this adaptation is a mixed bag of interesting ideas and dubious execution. Cassel is surprisingly restrained as the tempted monk. He was left on the steps of the monastery as a child and raised within its claustrophobic walls. When a masked pilgrim is given refuge his faith is tested as his repressed primal urges come to the fore.

Although the film possesses an evocative Gothic atmosphere it is ponderously slow with too many subplots vying for attention. Even though many of these plot strands slowly converge it feels rather bitty and disjointed for much of its run time. Characters also remain frustratingly underdeveloped and reduced to crude metaphor and the same extends to many of the sequences that lack subtlety - Ambrosio is even bitten in an idyllic rose garden to really hammer home the biblical references.

The film is reasonably successful when focused on Cassel and the battle for his tortured soul. Cassel keeps his emotions internalised as he struggles with his feelings before they spill out in a climax full of sin and blood. The rest of the cast are also decent but have very little to work with, particularly Déborah François who is completely wasted in a key role. Moll’s stylistic flourishes also occasionally undermine the Gothic atmosphere, particularly the oddly comical scene transitions that are completely out of place in a story of this kind.

The Monk is a film of wasted potential. Whilst the story of temptation and damnation should have been fascinating it is simply too undeveloped and slow to be considered successful.