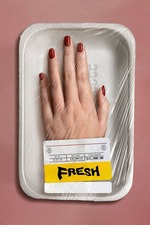 Lost In The Reel’s review published on Letterboxd:

Im just going to get this pun out of the way before I start, because I just have too... but DAMN, was Fresh so refreshing. Rather than showing all of its cards up front, this insane little movie takes its time, peeling back each layer of its story, every moment becoming more engrossing than the last. (This is proven by the fact that the title sequence doesn't even show up until forty minutes in to the film). The movie is constantly subverting expectations as well. Every time I thought I knew exactly where Fresh was going, it went somewhere completely different instead.

People will be comparing Sebastian Stan's performance to that of Christian Bale's in American Psycho... and they are not wrong. The character he creates in Steve is one so heinous and deplorable, that you just can't help but love to hate him and so, Stan delivers his best performance to date. And Daisy Edgar-Jones proves to be his perfect foil. Meek, yet mighty... innocent, but also highly intuitive. They truly make one helluva duo.

Critics have been praising first-time feature director Mimi Cave for her assured work here... as they should be... but, I think its Lauryn Kahn's deliciously twisted screenplay that is the real standout. Her script highlights the way that men take advantage of women, slowly hacking away at them (metaphorically), until they have taken a piece of what they think is rightfully theirs. And also the way others enable this kind of poisonous behavior. It's heavy stuff, but written in a way that is darkly funny and gripping to see unravel.

I do think that Fresh will be too "out there" and disturbing for mainstream audiences. But, and I know this might sound bad, I didn't think it took it far enough. This is definitely one of those cases of "if you're going to put it all out there and go there, you better just GO THERE". And I also think there is a subplot involving a character that I think could have been cut completely. Other than that, Fresh is a brilliant and gruesome ride that will make you squirm until you cheer.

Now, just give me a smile 🙂

Lost In The Reel liked these reviews

Lost In The Reel is using Letterboxd to share film reviews and lists with friends. Join here.

Lost In The Reel’s films