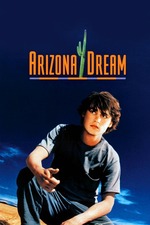 The history of Yugoslavia's booming film culture, cinematic protests, and impossible odds in making movies during inter-republic wars is a fascinating story that's worth mapping out, but it'll have to wait (probably tomorrow), as our current focus is that of the country's most internationally recognized director, an honor that's also partially responsible for making him the country's most controversial director. Emir Kusturica in his heyday could unarguably be an incredibly imaginative filmmaker, mixing together grim drama with anarchic black comedy to the point of having them collide into one another at a moment's notice, while holding his style together with potently romanticism and irony that made his gradual shift from Bosnian social realism to magical surrealism fully understandable. Over the 80's, Kustrica made three films, one being a Palme D'or winner (rare feat on its own regard, rarer still that it would be just the first of two victoris), and it seemed like his journey through the 90's would march forward to the beat of a Serbian drum if not for an unexpected detour into America. For whatever reason, Warner Brothers decided that Kusturica, the man who just made a film about a telekinetic boy falling into the Milan crime underworld, was the perfect man to throw lots of money at, resulting in him (alongside the nearly-unknown writer David Atkins) making an bizarre spiritual metaphysical comedy-drama about Eskino dreams and flying fish. Arizona Dream confused the executives who naively thought the man who just made a weirdo art film wasn't gonna make another weirdo art film, meaning a film made in 1991 wouldn't actually be released until 1994 in the US (Europeans got to see it early since they're more accustomed to this kind of stuff), where it got cut down, bombed massively, and pretty much ended any relationship Kusurica had with Hollywood, a split both parties agreed was the right choice. The one-off, however, would hardly end up being a mistake in his career, its peculiarly dazed impression of America and its free-wheeling style that creates magical craziness and poetic wistfulness.

Axel unwillingly joins a road trip to his car-dealer uncle in Arizona, embarking on an odyssey that sees him shed his New York life in favor of the love, instability, and dreams found in truly living within this current incarnation of existence. While the film's preference for irrationality in its storytelling makes its divergences and aimlessness loaded with ideas that tend to not add up into any cohesive themes and concrete philosophies, much of that is intentional as it tries to emulate the purity of life by not truly understanding the larger constructs of life in favor of focusing on floating through life, catching it not as stories that often betray life through vigorous planning but instead in spontaneity and flights of fantasy that externalize emotional states and humanity's inherent connection with the randomness of nature. Kusturica's way of translating that into something that doesn't a resemble a disaster ends up being a tricky one to actively dissect, nothing in the film's atmosphere is that outwardly "dreamlike" thanks to its roots in honest domestic drama, and its moments of unreality like the flying fish motif wouldn't be an outlier given the fostering 90's indie boom and the reflexive quirk found in works like Dead Man or Love Serenade, but perhaps it works thanks to how nimbly the director allows his subconscious works, lulling one with humor and unusual levitation metaphors that suggest the strong spirituality guiding desires of flight and belief in what comes after death, and letting the conventionality of comedy and drama in life rattle side-by-side until Kusturica can let life, stories, and visions merge well after one has grown accustomed to the few bends and shifts in the world Axel drifts about in, defying meaning for the most part since reality is not judged by a three-act structure (although Axel does take the time to lampshade a literal Chekov's gun that gets found haphazardly and, of course, comes into important play later on), but rather an unthinking current going wherever it leads, sometimes to a Raging Bull recreation, sometimes to an overeager mariachi band. One day in New York, the next Arizona, that's just life for ya.

Now I say the film avoids concrete meanings for the most part, there is one recurring theme that nearly every character ends up sharing, accentuating a common factor that forges and destroys relationships in one fell swoop. No matter who it is, every character ends up pursuing some sort of ambitious dream impossible to achieve on their own, defined by the past or the limitlessness of dreams that either create total catastrophe or give total meaning to someone's life. Axel's dreams of a flying fish end up reflecting his own search for agency and the will to stand-up and shape a world into his own, his older lover Elaine dreams of flying machines and Papua New Guinea in reflection of her fracturing emotional state spurred on feeling of being trapped and stuck with a person who openly resents her, Axel's brother Paul dreams of being the next Robert De Niro (literally in that the guy refuses to speak in anything more than an exaggerated 70's New Yorka accent) as an outlet of trying to understand life through the medium of stories as opposed to the randomness that it is, all these characters start their emotional quests incomplete and its through that scenario of completeness, the idea of uniting disparate psyches and dreams in improbable actions, that lofty success starts making more sense. The co-existence of dreams runs two routes, either in transcendence or in calamity (the latter demonstrated through one of the most hilariously deranged dinner scenes/slapstick through attempted suicide ever filmed), but either way the combination of aspirations has the power of changing life for the better, even if Kusturica knows the inherent fictionalization we make to understand dream fragments always creates false hope and unfulfillment, to say the least.

Having a man like Kusturica burdened with his own country's history try and process the massive mess we call Western Civilization allows Arizona Dream to be the tour de force oddity it is, creating indelible images like Axel's chicken imitation as an intro to passionate lovemaking, or Elaine's suicide-curious daughter Grace noodling her way on accordion numerous times, while ensuring its idiosyncrasies get fleshed out with depth and interpersonal struggles that let it rise above a prescribed quirkiness and turn into something deeply moving that also likes employing strange humor wherever it pleases (I do love the sight of Axel and Paul tussling their way all across the large patches of land Grace owns, just rolling around while a dog barks at them, it's great). Sometimes its poeticism can be misplaced, Axel's overwrought monolouges that interject the film through voiceover rarely end up helping the film and serve as a distraction from the surreal ground the film better rests on, but at the end of the day it's a fascinating work that knows how to say a lot even when its thesis is that it can't functionally articulate much of its inner workings beyond casual unfolding. A worthwhile way for me to get into Kusturica that makes me excited (and incredibly daunted) for his other major work of art.