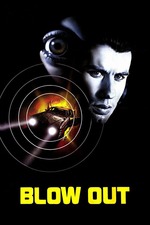 There are many tiny and intricate roles to the art of filmmaking that have a habit of being glossed over due to how meaty the roles of director, writer, and actor tend to be for a grand majority, and sound design is one such thing that people might know but not have a clue on how it works aside from any blatantly flawed attempts of it. At its core it involves finding the right sound timed the right moment, assembling a library of recordings for an aural atmosphere and placing in cohesive track placements for a mixer to balance and elevate the work of a person tasked with finding as many sounds as conceivable. For the sake of business, sometimes sounds get reused and get a long shelf-life on a designer/studio's library, and sometimes people reach a breaking point where they're so sick of hearing a certain sound effect that it grates on them and hopes that, for god's sake, they make a new sound. This is the scenario Brian De Palma was in, as the editing process for Dressed to Kill struck a small nerve when the sound designer pulled up a wind sound effect that had been used for De Palma's past four films, resulting in the sound editor going out in the woods and leaving Brian with the inklings of an idea. Several projects popped up that caught the then-rising director's eye concurrent to Dressed to Kill's release date, HBO wanted him for a film called Act of Vengeance, PolyGram approached him for Flashdance, Orion planned for him to helm Prince of the City before the deal fell through, but it was that sound designer that rattled around in De Palma's brain the most, wondering what would happen if that editor picked up not only wind in the night, but also an unexpected murder. Blow Out formed out of that idea's genesis, picking up alongside it some heavy influence from Michelangelo Antonioni's Blowup (a film that had already made a good impression on Brian way back in 1968 when his film Greetings threw in minor nods to it), and gave hesitant moviegoers one of De Palma's finest, intelligent, and gripping films in his entire career, a slam-dunk barely seen in its premiere and yet celebrated for decades to come in similar paths Brian's other cult films tend to go.

The death of a governor drives sound technician Jack Terry towards a relentless search for the truth, fueled by audible suspicions that there's more to the story than just an accident. Jack's obsessions mark a turning point in De Palma's career, as while Hitchcock and literary sources served as driving backbones for the paranoia of his leads, here real-life seeps through via the overwhelming decay on contemporary American society, as the inability to trust the constitution and government had worn down on its culture, mistrust forming in the wake of Watergate and Chappaquiddick that creates a compelling immediacy for a bystander like Jack to reveal a mystery every high-ranking official seems intent on covering up. While perhaps more intended to return to his hometown and strike on hot material with familiar treading ground, De Palma setting his conspiracy investigations at Philadelphia, a symbol of American liberty and its Founding Fathers, proves for the perfect ironic backdrop, a city so absorbed in its glorification of the American spirit that it can't bother to analyze or wonder about the private war that is assassination, peeling the last shreds of the safe layer protecting American freedom until it involves Jack facing consequences for his happenstance.

Achieving this is Jack, and by extension De Palma's, total laser-focused preoccupation with the mechanics of movie-making, as well as the complex interactions that come with sound, image, and the meaning buried within the mixture. Several scenes let us into the long aural investigation of Jack's recording (amusingly, all this while a film producer is hopping mad that Jack doesn't have his priorities on finding the perfect scream for a crummy co-ed slasher film that reveals just how long De Palma has had a low opinion on the genre), the constant rewinds and the reversed audio jumbles as the process of analyzing sounds occur, letting the audience train their ear before uniting image in one of the film's most memorable visuals, that of Jack finally cracking the answer as a split-diopeter shot showcases both his face and the crystal-clear "blow out" in question. The re-arrangement, re-editing, re-playing, and re-peating of sound and image becomes the best way in which to find any new or objective truth in something the larger public may not be aware of or even care that much, echoing the very production of films through meticulous examination and studios recreation while also dipping into cinema's habitual deception and the artifice of available information, tugging along in nerve-wrecking detail as the question evolves from "could an accident be more than just an accident?" to "would anyone even believe the evidence if that were the case?"

All of these themes nestle into Blow Out's tightly-scripted and deeply engaging thriller of modern times (well, WAS modern times, most of film technology's advancements would make this shit impossible to create long-lasting conflict and paranoia), forming a film that's incredible in its excitement, brilliant in its suspense, and a cynical blow to the gut that still stings even in this rewatch. De Palma naturally is at the top of his game, tossing out his trademarks like split-screen, split-diometer, a chilling long heart-racing spinning camera shot at a moment where Jack realizes just how trapped and severe his involvement has made him, and actors like John Travolta or Nancy Allen give some of the best performances of their career, especially in the former's case (lots of shlock and bad impressions make it easy to forget Travolta had the ability to be a good actor with the right material) with a laid-back everyman honesty as a sound technician and sublime natural romantic chemistry with Allen that ends up making the film all the more powerful as the two get drawn closer and closer. A dynamite thriller and supreme handling of its deeper subtext, it truly stands up there with Phantom of the Paradise or The Untouchables as a quintessential De Palma experience.