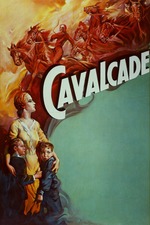 There's an argument to be made that Cavalcade and Cimarron are different sides of the same coin, both are historical epics whose goals aim to present the vast sociological and industrial advancements over the span of several decades leading up to the early 30's, and both are widely derided within their placements as early Best Picture winners since their scope is the only defining thing which made them notable enough to beat out their competitors. Whereas Cimarron was likely doomed from the start, this film had potential, it was based off a play by esteemed author Noël Coward in an uncommon dramatic turn that necessitated a spectacularly large stage and hundreds of actors, an ambitious move that almost seemed perfect to translate into a medium that could easily fill in the gaps of a stage's imaginary setting for a robust sweep of historical perseverance. The end result, however, defied that potential by being much too stiff and calculated for its own good, while also turning its historical backdrops into mere winks and nods that get all the more grating as the minutes pass by.

For 30 years we follow both the upper-crust Marryot family and their servants, the Bridges family, oscillating and eventually splitting off as the world changes and their luck gets threatened. There is an attempt to try and explore the class struggles and social dynamics between these two families, enveloping into a saga that understandably takes thirty years to try and see how tragedy will impact and ripple their generations, an idea that doesn't work because the film (and play) remains emotionally detached from its characters, not really interested in engaging with these leading characters and more preferring to listlessly spy on them, resulting in moments that could be stirring, like the maid Ellen worrying and trying to form a meaningful speech before he sets off to war, becoming mawkish and dotted by meaningless speeches and discussion, rarely offering any insight on their lives and just going through the motions with caricatures of British life and their ideals. The gradual dissolution of class structure ends up not really working because each member of the family are just vessels for ideas and perceptions of humanity, they do little more than just prove the flawed perception that no-one should escape their social class lest they face consequences (like Alfred the butler who tries to be a hot-shot and ends up just going a total 180 into a belligerent drunk, like there's no transition it's just he's fun and fancy free, the next he's trying to beat the shit out of kids) and because a tiring, inauthentic bore to sit through as it regurgitates the same message ad naseum.

Of course it also probably doesn’t help that nothing happens, like you’ve got a shit-ton of history here to try and imply that they hold weight to these schmucks, and not only do these events hold little emotional gravitas, often they happen OFF-SCREEN. The fact that the original work had to leave things implied is because it was a play, there’s only so much technological complexities you can do in an intimate space that you have to repeat night-after-night, but in the film these limitations aren’t fixed, World War I is reduced to an incomprehensible montage and the sinking of the Titanic is just a punchline after conversations of death and momentary bliss. History doesn’t impact either family, it just occurs concurrently, you could easily scratch off the serial numbers of Queen Victoria's death and funeral (the latter happens in like three minutes and all of it is from a balcony where the two Marryot shitkids argue over who deserves the last breakfast crumpet!) and nothing would be changed, because rides on in-action, it thinks it’s better to talk about the terrible woes the family faces rather than show it like it gives a damn.

The basic format of Cavalcade is something that’s been improved on by loads of other filmmakers, the showcase of a family’s trials and tribulations over decades is something The World According to Garp did much better, the meaningful impact of cultural history to generations of a family is something American Pop did with much more focus, hell even Forrest Gump does this shtick better, you at least saw Gump shaking hands with JFK instead of implying this famous figure existed somewhere. It’s just so overwhelmingly British (ironic given that this was an all-American production, hey maybe that’s why things feel so impartial to the ins and outs of British life besides monocles and upper lips), and while nothing’s outwardly terrible about it, the acting’s fine, the set design and actually scope’s kinda impressive for the time, its lifelessness and inability to connect with any real emotion is what kills it and lets it decay into a slog (and that’s even before the montage of class moral decay where it briefly turns into a “moral panic” movie as newspapers and brief club scenes suggest the downfall of humanity in the 30’s is because of drinking, divorce, dancing and — gasp — the gays!). It’s a film you only watch if you really wanna complete the checklist of every Best Picture winner, and it’s better left as the least remembered winner at that.