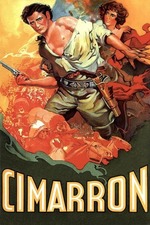 Whatever one's opinion is on the Academy Awards and their annual impossible task of informing the greater public what the greatest film of the year was, at the very least they grant some sort of debate and curiosity regarding if they'll get it right and contain plenty of years which spark a slew of people wondering why one film won when another film has held up so much better, picking apart the stand-outs that rightfully deserved a nomination or outright victory. This is what makes the 4th Academy Awards' Best Picture line-up such an abysmal one, almost every one could hardly be considered a good film (The Front Page being the most tolerable nominee, and even then a much better version came to fruition a decade later) and none of them have had any lasting legacy and remain remembered solely as odd talkie curiosities at an era when filmmakers were still trying to figure out how to make good movies through this seismic change. How Cimarron won Best Picture when City Lights didn't even get a single nomination across all categories is a depressing thought to think about, considering what was deemed the "best" turned out to be a bloated, dreadfully dull, and arrogantly flat film that's easily up in the running of the worst I've ever seen the Academy give a celebratory nod to.

Yancey Cravat decides to take his family across the Wild West in order to settle within the promising Oklahoma prairies, founding the town of Osage in the process, as one does. The biggest problem with Yancey besides his hammy Foghorn Leghorn accent is that he ends up being portrayed as this fearless pioneer, self-righteous in his actions and a long-winded speech for every bountiful challenge he embarks on that really makes the film drag and makes such unabashed heroism incredibly hard to swallow and not get annoyed by. Yancey founding a town by himself would, in theory, not be a bad starting point, ample opportunity to explore the personal struggles and perseverance of leadership, and yet the film goes needlessly overboard in presenting just how much of a jack of all trades he is, son of a bitch gets to be a lawman, attorney, religious priest, and as a result the film gets episodic and scattershot in trying to follow him take on a new job every week like he's a more competent Homer Simpson, making for a structure devoid of acts or any semblance of natural progress which becomes really stale really fast once its apparent he's also THE BEST at everything he does, there's no stakes because Yancey is such a one-dimensional character and any potential strifes or conflict is quickly resolved before the film finally gets fed up with this and tells him to fuck around somewhere else for 15 years just for something "new" to happen instead of his revolving 1880's misadventures (the only character flaw is his inability to be tied down and be a caring husband and decent father for long periods of time, and even then this isn't really suggested by the film as a bad thing and more a minor nuisance Yancey deals with in his pursuit for more activities to partake in).

Now in order to also show people in the 30's just how rad being a forefather with American values was, the film also tries to highlight a theme/morality message on tolerance, attempting an almost revisionist tale to apply a further edge in bravery on Yancey's part by having him display generosity and care towards the prevalent Native Americans, which isn't exactly something you really got to see in this decade (it adds another outlet for Yancey's stuffy goody-two shoes monologues, though, which doesn't help). Unfortunately, because this is the 30's and nearly every moral/social code regarding non-whiteys was still very stupid, its message ends up being conveyed in the most ass-backwards way possible and repeatedly shoots itself in the foot through lacking any modicum of nuance and skill regarding characters that aren't like Yancey. Even though Yancey is still kinder to Native Americans, he also doesn't bat an eye at trying to claim another part of their land as his for the sake of self-opportunism like everyone else, and while Native Americans aren't too bastardized with racist characterization, that can't be said for the one African-American character here, an uneducated servant of Yancey who whistles Dixie, offers the town watermelon, wishes he had fried chicken for dinner, is ridiculed for every action he does, the film still kinda has that half-hearted sense of caring for him (in that Yancey takes him under his wing when the boy sneaks off in his stagecoach) and yet almost every single stereotype for black people is presented here without recourse because dummies thought that entire race made for great comic relief back in the day. Everyone that isn't Yancey is essentially a caricature, the bank robber named The Kid (yeah real fuckin' creative lads) behaves like any gun-totin' varmit without soul, Rickey the letterpress printer has a stutter and that's basically his character, the male characters are bad and the women are written so much worse. All of the female characters are portrayed as irrational and crazy, Yancey's wife hates Native Americans with a passion and has a total meltdown anytime her son mentions the indigenous wife he plans to marry or whenever the local prostitute is brought up (there's character development in both departments, but it doesn't travel in a natural, gradual curve and instead just pivots the line 85 degrees right near the end), meanwhile the local prostitute has to be explained to Yancey that her management of land and decency is wrong and that she should align with Yancey's way of thinking, it's a giant mess and the problems it has regarding its racism and sexism wouldn't be so obvious (again, it's the 30's, all this is like mid-tier compared to other films' habits), but because it pretends to care that makes its fuck-ups so much worse and demonstrably more intrusive than other Westerns doing the same thing at this time. It's all...ugh.

By weaving a tale of nobility in the least noble, most on-the-nose way of storytelling possible, Cimarron is a case where its comparative scope is the only feasible reason towards why this stood a fighting chance at being a Best Picture, it was twice as long as the average pre-Code movie, time certainly wasted, and even then its scope is badly mangled by stiff, ugly staging with basic camera set-ups and dreadful sound mixing that smothers you with its blanket of ambient noise and crackling. To give some light praise, and even then they're charitable slices of appreciation, this film does provide at least decent visual insight on just how transformative and impressive the change in American culture was from the American West when people traveled on dirt roads to the then-modern world of bright lights and big cities in 1930, the film covers 40 years and its historical sweep is an impressive thing to think about (now if I gave a shit and didn't have to boggle my head trying to keep track of the dozens of subplots that waffle and deflate throughout, maybe it'd raise a half-star or something). The opening shot of the land rush is also incredibly impressive, its kinetic movement and startling angles from head-on to wide-scale accurately conveys just how much of a madhouse it was in trying to race for the best land between 100 other stagecoaches, and it's a great 5 minutes which suck because the other 115 minutes didn't stand a chance to live up to that brief moment when talent shone through in its filmmaking. This sucks ass, it's egregiously long and boneheaded in its narrative decisions, thank god people have forgotten this one.