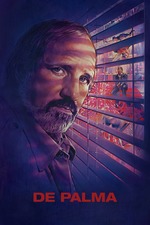 There's a small handful of directors that I really like to talk about and have become mainstays I return to every once in a while for the sake of filling in filmography gaps or just because it's been too long since I've watched an absolute banger I previously loved, and Brian De Palma absolutely fits that definition for me. I've reviewed over a dozen of his films, I dedicated a whole week just to taking an in-look depth at his stuff, three of his films currently rest in my jumble of 150 favorite films, I really like the guy and can say that I'm a pretty big fan of his work, even though it's still one I'm working my way through (while I've experienced a lot of his acclaimed gems, 12 deep cuts still remain for me to have a swing at one of these days). Not surprisingly, De Palma was something that peaked my fancy ever since its initial announcement, it suggested an in-depth look at a pioneer of New Hollywood in the form of a retrospective for his long, storied library of memorable films. While the master himself makes for a great raconteur, the actual presentation stifles him into a generic, barely-above "DVD bonus"-quality expose.

With a memory that's as sharp as a tack, De Palma fills us into the ups and downs of his tumultuous career with a strong preference on his self-admitted relationship with cinema, leaving anything connected to his life outside of movies (adolescence, his three brief marriages) as footnotes to his legacy. Brian ends up making do with just his knowledge of movies, since he provides plenty of insights and filmmaking lessons he learned from Hitchcock, noting both men's careers (and really a large majority of filmmakers) depend entirely on creating illusions to be killed and dismantled over a designated runtime, and discusses plenty of wise reflections on how he blocks a shot, the importance of cutting and build-up, how he constructs an idea for his characters to dizzily fall into place, and the often relentless behavior he gets into just to try and convey something in a visual style that hasn't been done a million times before (a problem that, in an argument that predicted the abundance of a certain subgenre, isn't helped with FX artists having to pre-visualize a shot for a director and form visually redundant elements like explosions in a rigid pace just to save time/money). The struggles of a legend gives way to an equal amount of straightforward admissions towards mistakes and frustrations with studio interference, as well as amusing anecdotes regarding the disputes and the arduous shooting schedules to naturally come out of a notorious slog like the filmmaking process (I do love the sarcastically dry way he points out how all the other Carrie remakes make mistakes he's glad he never made, like having a major character die by a heart attack as in the book instead of crucifixion), and when taken by himself De Palma is able to really converse and connect to fans like me wanting to know a little more about his work and methods (although, and this is a case of foreshadowing here, "little" turns out to be the key word).

A cruel irony, however, emerges in that a director that seeks out the most visually inventive ways to make film is presented in the one of the most visually uninventive, garden-variety forms of documentary you could make out of a single director. It does avoid relying on "talking heads" and just lets De Palma speak by himself which, y'know, that's good, he has one of those personalities you could just listen to for hours, yet some of the narration does have a sense of being jammed and rushed together, with sound quality that's somewhat off and dull after-effects re-sizing of the single camera angle they used on Brian in a flawed attempt to create some sort of visual flair. The remaining 65-70% of footage, of course, comes from De Palma's films (with cameos from things like Vertigo or The Muppet Show for the sake of further context), which have the unfortunate habit of being choppy and inconsistently cut, sometimes letting us linger way too long on a clip without Brian's interjections, sometimes cutting up his long takes before we can even appreciate them while he's talking about them, the whole lot of visuals are just a sliced-and-diced gathering of visuals that don't properly communicate the ideas that De Palma's words are tasked with backing up, and just makes for an annoyance since they tend to be no better than just watching the films discussed, except with the actual hour+ to better let that long build-up actually work and pay-off rather than just serving us the goods on a platter. There's a good way to try and compile a long archive of great shots into something still worth watching divorced from their original context, and neither this nor the ultra-simplified conversation pieces are entirely examples of a "good way" of doing a doc like this.

More to the point, De Palma is something that I think would work primarily for the fans, it does its chronological deep-dive from an insider's perspective and while I don't think De Palma's way of relating his wealth of information and collaborators comes across as inaccessible for those who haven't seen much of his body of work (its the clips that are the biggest problem, good thing I've seen most of his films because the doc spoils the SHIT out of them with the "good bits" and endings shown for several that would no doubt rob the impact from those just getting into the guy), it's the type of style that tailor-makes itself towards those eager to learn more rather than eager to learn from square one, its additional info on the guy rather than a starter pack. The trouble with me is that, because I tend to research this kind of shit for a couple of reasons, I've already a lot of this stuff just from trying to pick up as much info as I can, there's a couple of factoids I've heard in other interviews, some I've read in books about him, and the end result makes for a man I learned a little more about but not much more than when I started (doesn't help that because De Palma's made so many movies in his nearly 60-year(!) filmmaking career, each film is granted very little time to get any sort of satisfactory summation of the strifes and relevance in his personal history). Sure, there's some fucking valuable bits and pieces here, it's great seeing things like Brian's student film, Woton's Wake and the original (better) ending for Snake Eyes, and I can't deny just how much I like hearing De Palma talk for an extended period of time, it's just that the actual execution and the limits it offers for both non-fans and fans-who-browse-the-web-a-lot make for a disappointment. It's the Raising Cain of De Palma docs, a barebones redux of words and images that's been told in better outlets.