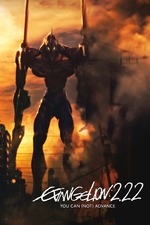 I miss the old Asuka
Straight from the Go Asuka
Chop up the soul Asuka
Set on her goals Asuka
I hate the new Asuka
The bad mood Asuka
The always rude Asuka
Spaz in the news Asuka
I miss the sweet Asuka
Chop up the beats Asuka
I gotta say, at that time
I'd like to meet Asuka
See, I invented Asuka
It wasn't any Asukas
And now I look and look around
And there's so many Asukas
I used to love Asuka
I used to love Asuka
I even had the red jumpsuit, I thought I was Asuka
What if Asuka made a song
About Asuka
Called "I Miss The Old Asuka"?
Man, that'd be so Asuka
That's all it was Asuka
We still love Asuka
And I love you like Asuka
Loves Asuka

Shitposts aside, this one...still really does not work on me, I think my main problem with it lies in trying to take a very reconstructive mentality towards the mecha anime akin to how Gurren Lagann turned the genre cool and fun again, even with the very critical sensibilities both the series and, by proxy, 1.0 firmly establish, it tries to find the best of both worlds and inadvertently only ends up sullying both ends, opting for something that's admittedly lovingly animated (I mean, yeah, I think I glossed over it but the final scene is absolutely gorgeous in its vibrancy and intense color pallet) at the cost of being hollow in its emotional core. Of course, this reviewing has allowed me to better pick up on some of the poignant themes of the original that still survive (Kaji's discussion with Shinji on how withstanding the process of suffering can result in becoming kind through knowing the plights of others), but it still immensely bothers me just what has been reduced down to its most base-level simplicity, and while it's been a part of Anno's methodology to entrust his viewers to gradually accept change in life, here it just comes at the cost of great complex storytelling (especially with Mari, the new character who I feel is meant to be the pilot that embodies the unironic excited spirit of a person piloting a giant robot, yet her characterization and small screen-time just makes her feel like an OC fanfic character rather than a truly fleshed out character) and I just get so numb trying to put in the effort for something that doesn't resonate with me.

Reflecting on it now, I can see why Evangelion: 2.0 You Can (Not) Advance is considered to be, on average, the best of the Rebuild continuity's first three films, it has exceptional animation, notable amounts of comedic brevity early on, and it has enough action to keep a person invested in that genre of anime satisfied. At the same time, however, with the way it utilizes those aspects it becomes less like Evangelion, and more like the million other animes it ended up influencing, less of a trailblazer and more of the times, and as someone who poured my heart and soul discussing the original series, it irks me to no end.