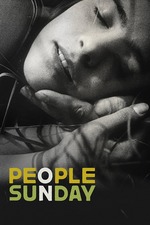 The influx of German refugees seeking to escape Hitler's regime had a profound effect on Hollywood and its classic era, its best talent finding fame and fortune to the point that their American output outpaces their native films by a country mile and made for a hell of a living. Many of those who chose to self-exile themselves from the Third Reich when they had the chance, however, barely survived and often lived unemployed or having to make do with driving taxis around Tinseltown, yet among those lucky few were Billy Wilder, Edgar G. Ulmer, and Robert Siodmak, known for witty script-writing, quick filmmaking, and reliable completionist, respectively. During their time in Germany, all three previously worked together in a genuine once-in-a-lifetime collaboration called People on Sunday, with Ulmer and Siodmak sharing directing duties and Wilder taking the bat for writer (although Wilder's peers contest the most he offered were a handful of ideas shouted from a couch), and what the three were able to come up with was a valuable document of Berlin before Nazism's rise, a brisk and sublime stroll through relaxation and docu-reality in one.

Notable for its claims as a film without actors, i.e. including real-life workers who never appeared in a film well before Italian neorealism would make a habit out of this decision, any semblance of a narrative is razor-thin as it instead focuses on the ordinariness of people, forging four such characters with aspirations and dreams that are generally glossed over for the sake in focusing on their enjoyment, often turning towards sensuality between those of the opposite sex, while never over-emphasizing the emotional state towards the four we follow, nothing that suggests any appearance of over-calculation or greater planning on the motives of those earning a break, just a mere capsule of the joy of living, innocence, and love's potential that breaks away at more than a few occasions. One could see this as drawing more awareness to film's existence as an illusion, after all it takes a lot of effort to make a bonafide simulacrum of reality that feels real and authentic, and it works for a naturalistic objective observation of reality, giving a glimpse of people and not offering much more than a boat-ride, a picnic, and a bit of jealousy to bookend the day's non-work (hey, it's still a narrative, gotta have a little bit of conflict to spice things up even if it doesn't escalate beyond a woman wanting to wear the rim of her hat upwards).

As the title implies, however, while some individualism is presented for the four main chums we follow (the machismo that equally works and backfires for Wolfgang and Erwin, the confidence and ability to see through male flirting for Christl), greater preference is done to see them as part of a group, each one in a million within the greater whole of Berlin that removes its citizens from the usual vision of Berlin as hectic and restless, instead envisioning Germans on a day of summerly peace and carefreeness. A handful of montages are included to reinforce this point, most memorably with a cycle of on-lookers photographed and posed in natural happenstance (each with real-time inserts of their photographs that must have been a hell of a thing to sync up properly back then), their faces, their existences, very little we know beyond their laconic rest in the week, all of whom could have been the star of their own movie given the ordinariness we've seen thus far, and great measures are down to show Germany emerging from their post-war period not wallowing in the worldwide economic depression, but living their pleasant simple lives however they can. While bliss would not last for very long, the film offers a more optimistic, hopeful, yet uncontrolled impression of Germany in stark opposition of the country's other, more famous film movement, one choosing to express through life rather than deliberate non-reality.

Even though People on Sunday's appraisal of the trivial is not without its own criticisms of culture and playfulness (a tracking shot through the trees that maneuvers around intense love comments on the superficial momentariness of urban life the moment it ends on a pile of discarded trash), it does well and good in presenting a lower-middle class as it was, the daily street life of the benign at its respectful distance in the way only truly achieved through silent film. While I can't say its as moving and inspired as it likely would have been when it premiered 90 years ago, and its mundane nature means its emotional distance was something that left detached at times waiting for those special moments of a singular nature like Bridget's slumber in the fields to occur, a freshness in its cinema verite style is still potent, its portrayal and documentation of a country and its people makes for an overall lovely time and its no wonder its major behind-the-scenes contributors would go on towards bigger and brighter pastures.

Part of the Collab Film Club