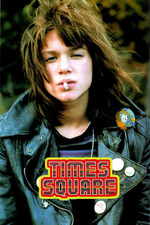 By 1980, the foundation for everything that was once the punk essence would be formed, with its splintering into different subsections like new wave or post-punk, and a sharp divide between the east and west coast, making a point as to where your loyalty stands by which bands you listen to. Times Square captures that essence by breaking down the fundamentals of presenting a story like this down to its rawest potential, stripping away the complexities that progressive rock had articulated in the 70s and any of the other dinosaurs that were being pushed off the airwaves to instead show something made of pure emotion, obscuring nothing but the truth. This minimalism is no doubt frustrating at times and almost more resembles the brief "No Wave" movement in New York that stripped things down further, but it matches the aimless anger of the youth at the time and almost seems to knowingly critique it, yet lovingly lives in the fantasy at the same time just because the glamorless punks give us misfits a realistic goal, by showing what can be done with three chords and the truth (though more can truly help).

In the heart of New York, Nicky Marotta, an abrasive teen that knows her way on the streets, guitar in hand, and Pamela Pearl, depressed, insecure, and daughter of a commissioner on a campaign to clean the streets of its grime and personality, meet in a neurological hospital and make their escape, bonding and forming The Sleez Sisters on the way. Of the two, Robin Johnson as Nicky is the clear stand-out (despite Pamela's Trini Alvarado gaining the much more fruitful career), having the voice of a gravelly world-weary soul even at 16, and managing to gain our sympathy even on her path towards self-destructive fame, struggling to cope with her mental issues even with the talent she has in channeling her anger into something palatable and honest for others. We are shown that Nicky's psychosis is a genuine problem and almost seems to match the misguided anger of not-quite-authentic punks, mindless and without a point to make, but it's through how she manages to express her thoughts without any bullshit that reveals why the punk spirit is admired by those of Gen X, by being upfront with her emotions even if it means the process of destroying oneself.

Before all that, though, the film takes some time to let the bond between Nicky and Pamela play out, almost episodic in nature and never really dynamic until its abrupt shift. Much of the film's narrative can come across as disjointed, odd editing causing some scenes to not really gel next to each other and insitgating an almost whiplash feeling. Curious research revealed that this is more the result of producer Robert Stigwood's interfering, demanding scenes that featured more overt lesbian content (in a film that, in its current form, is still very much easy to read as a lesbian love story) be cut, damning important characterization for the sake of commercial appeal (which, needless to say, did not work). Although this is still a problem in the grand scheme of things, the film's surviving moments still offer charming moments of cozy anarchy that feel like small slices of life in its realistic showcase of two teen girls forming a close relationship and the happiness that arises from their ugly setting (think Heavenly Creatures, only more minimalist and less diseased).

As implied a little bit ago, the city of New York is just as much a character in Times Square as our two leads, run-down and gritty, littered with grindhouse/porn theaters, yet a place to encourage an enhanced level of confidence, to roam the streets at night proud of yourself and unafried of the terrors of the world since the scummiest of it is centered in beautiful New York (damn you Guilianni and your reasonable clean-up for crime). Tim Curry acts as an overseer of the city, a voice to the nocturnal roamers, yet in a way egocentric and self-serving for the sake of more 4 AM ratings (something that isn't really explored to its fullest potential, and that's more because Curry was on-set for only two days). The contradictory yet meaningful world of New York perfectly fits with the soul of punk rock, and if that's something you can jive to, then hey, maybe this one will keep you satisfied.

Side-note: Soundtrack's great too. From bands I already love like Talking Heads and The Cure to more obscure stuff I'm very eager to listen to more of, like Suzi Quatro and The Ruts, it's a great sampler of the music of 1980. Marcy Levy and Robin Gibb's "Help Me!" is kinda cheesy to be included here, but to me works well enough within the context of the film and is the more earned type of corniness at that point.

Part of edithwharton's Collab project (and her profile)

As always, we got a website, archiving the eight other films we've done so far and the myriad of great contributors.