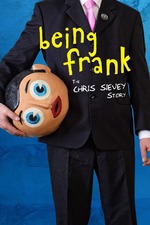 Being Frank: The Chris Sievey Story

About as comprehensive a review of the work of Chris Sievey aka Frank Sidebottom as you can get, as it covers his early solo work and The Freshies before eventually moving on to the man with the papier mache head who "became a monster".

Sidebottom became the superstar Sievey never was, with his catchphrase "bobbins" and his songs about Timperley; forever 35 and living with his mum, the only weirdo in the village.