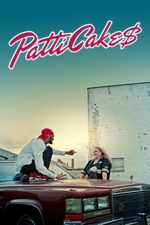 Danielle Macdonald is excellent as Patti, who is overweight and a bit dorky, who wants to be a rapper. It's a good performance even if the plot of this musical drama totters into cliche after the half-way point.

In Geremy Jasper's film I also enjoyed the performances of Siddharth Dhananjay as Jheri (supermarket worker, drug pusher), Bridget Everett as Patti's loser mom (watch her shine with Heart's These Dreams in karaoke, sloshed but vulnerable), Mamoudou Athie as metal-head rapper Basterd, and Nick Sandow as sleazy Ray, and the locations with their dark corners and splashes of neon feel real.

The soundtrack is full of the rap Patti longs to emulate (and the film sometimes teeters into 8 Mile territory), and the characters try to escape stereotypical shackles - they don't quite get there, and the blame for that is definitely at Jasper's door as he wrote the film as well as directed.

Being Frank: The Chris Sievey Story