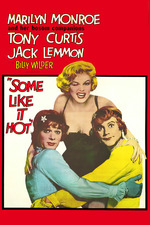 It has it all - a superb pair of comedy performances from Jack Lemmon and Tony Curtis as the men who witness a massacre on St Valentine's Day and have to go on the run as part of a girl dance band. Lemmon in particular shines throughout.

It has Marilyn Monroe at her most vulnerable as Sugar Kane, not very bright and addicted to bourbon and saxophone players.

It has George Raft as Spats the gangster, sending up his earlier films and coin tossing: 'where did you learn that cheap trick?'.

It even has an Eve Arden clone as Sweet Sue the bandleader, always a bit suspicious of the new bass fiddle and sax players.

It's basically an absolute joy, from Curtis and his Cary Grant impersonation to the joy of the tango to that glorious Monroe wiggle.

And there are songs too, notably 'I Wanna Be Loved By You' and 'I'm Through With Love'.

All the World's a Screen - Shakespeare on…