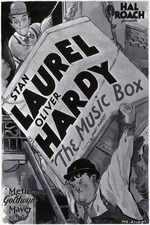 Mr Laurel and Mr Hardy, a piano and a house right at the top of a flight of steps. Sounds like a recipe for success, and it is.

'The Music Box' sees our dysfunctional heroes as delivery men who have to take a large, heavy piano to the house of the von Schwarzenhoffens (the mad professor and the twittery wife, typically staple characters of comedy shorts).

A small and talented supporting cast of tiny cameo roles includes Lilyan Irene as a giggly nursemaid, Billy Gilbert as the blustering Professor, and Charlie Hall as the smart Alec postie.

The delight of 'The Music Box' is watching Laurel and Hardy themselves, consummate comedy performers, with their slapstick and their engaging personalities.