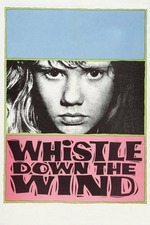 Whistle Down the Wind

"I said yeah. You'll hear about me again."

I gave this just shy of a five star score last time, but now I can't find any fault with this film.

Fourteen-year-old Hayley Mills is absolutely superb as the girl who thinks she has discovered Jesus living in her barn, and Alan Bates (in his first starring role) matches her scene for scene as the convict whose desperation, fatigue and confusion leads him to play the part she has created for him.

The joy of this film is the simple allegory about Christianity and the evolution of the young girl who finds herself attached to the mysterious man, and the huge group of children who become his followers.

Filmed in Clitheroe and Burnley in Lancashire, largely using local children, this showcases the performance of young Alan Barnes as Charlie, who brings an innocent and deadpan humour to the situation.

Magical, moving, and just as relevant to an audience of adults as it is to children (I first saw it aged about eight, and I'm watching it now more than thirty years later), this is one of Brian Forbes' best films, beautifully directed and photographed.

This is a film which gives back more with each viewing. Quite simply one of the perfect examples of British cinema of the 1960s.