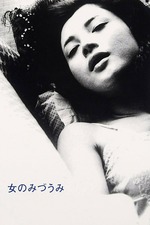 Woman of the Lake

The feeling of finding a director whose distinct sensibilities align so precisely with your own that with the introduction of each new composition and cut you find yourself falling deeper and deeper in love. It gets to the heart of the 'abstracted realism' which seems to have become my favourite means of cinematic expression as of late, where the image itself transforms the ordinary, physical world into something intangible through nothing more than a singular, precise sense of composition.
At it's core, this is a film about representation, Yoshida beginning his elliptical narrative with the stealing of a collection of revealing photographs, only to use this nearly-Hitchcockian Macguffin as a means of exploring all the complex ways in which we perceive ourselves, crafting a world full of questionable connections and repressed urges which seems to swirl around the abstract idea of identity. But working in parallel to this is something deeper, a meta-narrative which questions the entire notion of eroticism and truth in cinema, a pivotal scene in which our two main characters observe a film crew shoot a tender kiss between 'lovers' revelling in the artifice, in turn making us question every sensual glimpse of intimacy we see later in the film. It's complex and idea-laden without ever feeling laborious, the work of a cinematic artist who seemed to be at the height of his powers. This Arrow box-set can't come soon enough.

Come Drink with Me