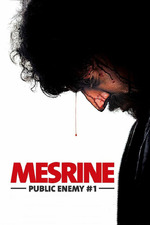 In my review of part one of this double feature, I mentioned a downside to the film was that things seemed very embellished and hard to believe. Well…I must say, it was only after finishing this second and final film that I went onto my good friend Wikipedia to read up on the true story of Jacques Mesrine…and shockingly enough, somehow/someway…a lot of this crazy shit actually happened. I guess I should never assume.

Anyways…onto the film itself. This second part is pretty much comparable to the first. Lots of violence, lots of action, very well executed…all around very entertaining, although maybe a little bit more methodical than the first film. I honestly have nothing valuable to add when comparing the two…other than to say, if you watch the first film it will be near impossible to not want to see how it all ends. They are both very similar in style and tone just like the split up Kill Bill films for example. They are a package deal…you must watch both to get the full and best experience. Although the first film stands alone in some ways, watching this second one on its own just wouldn’t work. So yeah…it’s basically a four hour movie that was chopped up for some reason. Ideally, if you have the time…just screen them back to back, you’ll have a great time with it.