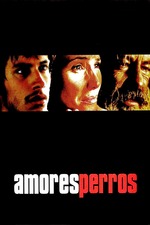 Very sad movie that likes pulling on your heartstrings with dogs and violence against people.

The sadness rarely feels earned however, as the film will constantly play guitar chords for sad moments. Sometimes it feels back-to-back.

Quite a few plot holes too: How can a dog heal from a gunshot wound with just a taped on bandage. How is a dog able to survive under an apartment’s floorboards off nothing but rats and chocolate? Also, how can you be followed for miles by such an obviously shitty beat-up truck and not notice?

A couple scenes are missing sound effects. And I noticed one car crash had a strange doubling effect.

The editing is usually good, but I noticed some scenes were relying too much on the music than the actual editing/filming to heighten the intensity. It felt like they were using the same shots over and over without the scene developing. (The first sex scene in particular)