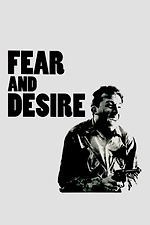 This would mark the directorial debut of the acclaimed but often controversial director Stanley Kubrick and in this war drama, the story concerns a four soldiers trapped behind enemy lines that must confront their fears and desires.

After their aircraft gets damaged behind enemy lines, a group of soldiers have to survive and aim to find a way back to their multitude. However, when they stumble across a local peasant girl, the dismays of war rapidly turn out to be deceptive.

Frank Silvera, Kenneth Harp, Paul Mazursky and Steve Colt all give OK performances as the four soldiers who try to survive the elements after what has happened, but the four characters don’t really know what to do with themselves and it appears to be me they are just waiting for something dramatic to happen.

Elsewhere, Virginia Leith is OK as The Girl who arrives on the scene, while David Allen does a respectable job narrating the film.

The direction from Kubrick is OK but it should have been better, such as showing more facial expressions to a stronger effect, as well as having more of a tense atmosphere happening as well – this doesn’t occur much.

The script is written to an OK standard by Howard Sackler as it is weak in places and there are scenes that did not need to be in the final edit, so even though this runs for only 64 minutes, it could easily have been a short film.

Stanley Kubrick really did not like this final product when completed and attempted to destroy every copy of the film that was available, but he didn’t succeed in doing so.

It’s safe to say that he did not get off to the best of starts, but he would go on to direct better, but sometimes extremely controversial movies in the future, such as 2001: A Space Odyssey and Barry Lyndon.

Overall, Fear and Desire is one very disappointing B-movie from Stanley Kubrick, thanks to the OK performances, direction, weak script, slow pace and lack of action.

Pandora and the Flying Dutchman