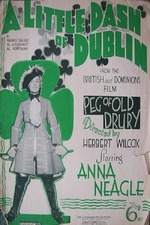 This British drama directed by Herbert Wilcox was a big hit at the box office – not just in the UK – but also the United States as well, so there must be something good about this film – and I am pleased to say that there is.

This film is a biopic of Peg Woffington, an Irish actress in the 18th century who danced and acted at various Dublin theatres until she became successful with The Constant Couple, a play which made her a hugely popular actress afterwards. She openly lived with David Garrick and had love affairs which become notorious.

She carried on acting and entertaining until she collapsed on stage in 1757 when she was performing As You Like It. She was then diagnosed with an illness that would end her life just three years later at the age of 40.

This film, which also contains extracts from the William Shakespeare plays The Merchant of Venice, Richard III and As You Like It, sees Anna Neagle give a very good performance in her role as Peg Woffington and she suits the role well in one of her best roles in her early career, while Cedric Hardwicke is decent in his role as David Garrick and he suits his role well too.

Elsewhere, Margaretta Scott is respectable in her role as Kitty Clive, while there are fine supporting performances to be had from Maire O’Neill and Arthur Sinclair in their respective roles as Peg’s mother and father.

The direction from Wilcox is good because he allows the facial expressions to be seen to a good effect throughout, while the script is written to a decent standard by Miles Malleson as he makes the film easy to follow.

The technical elements of the film are good, with the set, cinematography and costume all standing out best, as the set is decent to look at; the camera makes good use of the locations the movie uses; the costume is very decent to look at throughout.

Overall, the good performances from the cast, along with the direction, script and technical elements means this is one very enjoyable comedy drama. You will definitely learn something about Peg Woffington.