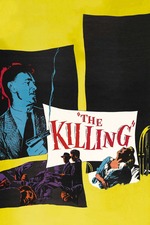 The third feature to be directed by Stanley Kubrick is a BAFTA-nominated thriller in which crooks plan and execute a daring racetrack robbery. Starring Sterling Hayden, Coleen Gray and Vince Edwards.

Stanley Kubrick’s career didn’t get off to the best of starts with Fear and Desire but did a better job with his second film Killer’s Kiss. Now, The Killing is the movie that I consider to be his breakthrough film.

Job gangster Johnny Clay (Sterling Hayden) gathers a sharpshooter (Timothy Carey), a curved cop (Ted de Corsia), a barman (Joe Sawyer) and a gambling cashier named George (Elisha Cook Jr.), amid others, for one final job before Johnny goes traditional and ties the knot with his fiancée, Fay (Coleen Gray). But when George tells his fidgety wife, Sherry (Marie Windsor), about the plan to take away millions from the racetrack where he works, she comes up with an idea of her own.

Sterling Hayden gives a good performance in his role as Johnny, the criminal aiming to pull off one more heist before deciding he has had enough, while Timothy Carey, Ted de Corsia, Joe Sawyer and Elisha Cook Jr. all give respectable performances as the members of Johnny’s gang who help him try to make sure the robbery works as planned.

Giving a decent supporting performance is Marie Windsor in her role as Sherry, George’s twitchy wife who doesn’t like the idea what George and his group have come up with, so she devises a plan herself.

The direction from Kubrick is very good because he allows the facial expressions to be seen to a strong effect throughout, while also keeping a tense atmosphere happening as well and the script is written to a decent standard by the director and Jim Thompson as they make the movie good to follow.

The technical aspects that stand out best in glorious black-and-white are the camera and sound, because the camera makes very good use of the locations and also captures the tense moments well, which get the edge-of-the-seat status; the sound is decent as you have to listen carefully and only adds to the tension.

The film did win a BAFTA nomination for Best Film from Any Source, but this I disagree with, as I don’t consider this to be one of the best films from this year. However, I am surprised to find out that this was a flop at the box office.

Quentin Tarantino said that The Killing gave him a strong influence for his respectable but disturbing debut film Reservoir Dogs.

Overall, The Killing is a very decent film-noir from Stanley Kubrick, thanks to the good performances, direction, script, technical aspects and tense atmosphere. Although this isn’t a masterpiece, it’s another improvement for the director.