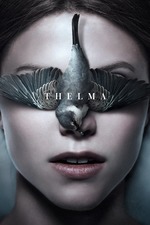 Joachim Trier takes charge of this thriller starring Eili Harboe as a woman who, when she starts at university, discovers she has worrying supernatural powers that endanger the people she cares about. In Norwegian with English subtitles.

The story concerns a college student who begins to experience dangerous appropriations while learning at a university in Oslo, Norway. It isn’t long before she finds out that the fierce episodes are an indication of incomprehensible, and frequently hazardous, paranormal aptitudes.

Eili Harboe gives a very good performance in her role as the title character Thelma, the university student who begins to have nightmares, meaning the people she likes have to be careful with themselves. Harboe suits her part very well and makes the most of the time she has on the screen.

Elsewhere, there are decent performances to be had from Ellen Dorrit Petersen, Henrik Rafaelsen and Kaya Wilkins in their respective roles as Unni, Trond and Anya. Unni is Thelma’s disabled mother, while Trond is Thelma’s father and Anya is the fellow student who Thelma falls in love with.

The direction from Trier is very good because he allows the facial expressions to be seen to a strong effect throughout, while also keeping a tense atmosphere happening as well and the script is written to a decent standard by the director and as he makes the movie good to follow.

The set, camera, music, sound, editing and visual effects stand out best in terms of the technical aspects, because the set is brilliant to view at all times; the camera makes very good use of the locations and also captures the tense and dramatic moments well, which get the edge-of-the-seat status; the music is enjoyable to listen to; the sound is fantastic as you have to listen carefully at times; the movie is edited to a terrific effect; the visual effects dazzle whenever they appear on screen.

Overall, Thelma is a very enjoyable Norwegian thriller, due to the very good and central performance from Eili Harboe, along with the direction, script, tense atmosphere and technical aspects.