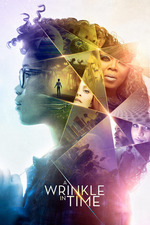 At the cusp of the hero's call, Reese Witherspoon dressed as Bjork would have in 18th century Russia tells the protagonist something along the lines of "Everything that has happened since the universe was born led to you being who you are - you're special." Sadly, the same could be said of Adolf Hitler or, perhaps, the movie A Wrinkle in Time. This is most definitely a special film because it reminded me of the true stakes of going to the theater. Viewer beware or abandon all hope ye who enter here: this is one of the worst movies I've seen on this level of production since Tim Burton's Madame Pomegranate's Fantastical Hovel for Persnickety Mutants. Unlike some folks, I'm not just going to tell you that it sucks but why it sucks in hopes that you will tesser your way into a different movie billions of light years away from this silly rainbow-colored bucket of awful.

Chris Pine is a hobo scientist with a beautiful wife, daughter, and adopted son who he obsessively ignores to concentrate on "shaking hands with the universe". Driven by a particularly bad public speaking event for the United Nations of NASA, he manages to discover trans-dimensional travel in his laboratory full of Pro Tools frequency analyzer plug-in monitors, flashing lights, and a cymatic particle membrane (because science?). Since his minimalist techno project isn't taking off, he gazes off lovingly at the family he is neglecting and discovers that "love" is the key to that sick beat that will take him far away from his family...that he loves...a whole lot.

Four years later, his daughter (Storm Reid) is a social outcast, taunted and bullied mercilessly because she is smart and her father disappeared. Her precocious post-toddler brother (Deric McCabe) goo-goo, gaa-gaa's smugly at adults ad nauseam in a desperate attempt to out-ham Jaeden Lieberher in The Book of Henry, and I could barely understand (phonetically) what the little twerp was saying the whole time. For some reason, he knows a bunch of goofy-ass looking trans-dimensional fairy/witch/genies played by Witherspoon, Mindy Kaling, and Oprah Winfrey. You've probably seen what they look like in trailers, and you would be correct in assuming every second they are on screen is fucking hilarious. Excuse my superlative cursing, but if the movie was just the first act, it might be one of the most unintentionally funny films I've ever seen, but as the rest of the film unfolded it really turned into a nightmare.

You've got Liberace on bath salts in charge of costuming, Avatar-level green screen overload, and a secondary character who shows up for absolutely no reason except that he just "felt like (he) needed to be here", a dreamy-eyed teen heartthrob who's sole purpose is to ask exposition-prompting questions and give Reid sporadic compliments like "I...like your hair." Congratulations, Asa Butterfield, now I want to punch Levi Miller in the face more than you. Then they bring out the big exploding shit, and we're somewhere in between New Age spiritual psychobabble and Transformers off and on for a good hour. Don't let the one scene with a nod to The Holy Mountain fool you, this is a generic blockbuster that somehow manages to cram all of the most simplistic pseudo-spiritual tenets into it's underlying themes in earnest.

Did you know that the universe is inside you? Did you know that love is eternal and binds us together? Every three or four minutes, somebody utters a feel-good truism to make you feel like you're learning something deep, but it's all terminal myopia. And why does the utter embodiment of evil always have to be BLACK? Why is dark stuff bad in the movies? Seems kinda racist to me. I'm kidding of course, but the real irony of all the armchair spiritualism of the movie is that Madeleine L'Engle's book (and book series - franchise here we come!) was an overt piece of Christian fiction with clear references to the New Testament and Jesus Christ - both of which are glaringly omitted from all of the proceedings herein in lieu of Buddhist and New Age precepts. I'm not saying that's a bad thing, but you're kind of alienating your target demographic. To counteract the never-ending denouement of this film, I'll just end the review here.

Also, I need to mention that the movie is 80% face close ups, and even the IMAX aspect ratio barely fit the actors' faces on screen half the time.