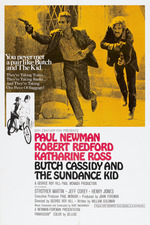 Butch Cassidy and the Sundance Kid represents a perfect vehicle for the talent and charisma of Paul Newman and Robert Redford who, very close and complementary, create one of the most successful cinematic couples ever. The two are the absolute protagonists of this crepuscolar and atypical western that recreates with brilliant and humorous tones, but on the edge of nostalgia, the latest adventures of the two legendary outlaws, to tell the end of the West and the emergence of a new world. George Roy Hill fits in his own way in the revisionist vein of the genre, carried out by some filmmakers, standard-bearers of New Hollywood, such as Peckinpah, Penn or Altman, re-reading the epic of the two bandits, like a light-hearted adventure. Butch and Sundance are portrayed as adorable rogues out of time, linked by a cheerful camaraderie spirit that does not fail even in the tragic epilogue, from which the film takes an essential part of its meaning.

Unable to change and to accept an honest life, and driven by an irrepressible spirit of rebellion towards the established order, the two find themselves fatally protagonists of a series of raids, thefts and robberies, in an endless escape that leads them to Bolivia, where they are besieged by the local army. There are a thousand enemies and they are alone. The ammunition has almost run out. They are wounded. They have no way out. They look each other in the eyes and, without adding anything else, throw themselves out of the hut where they were barricaded, shooting madly. The film ends just like that, without showing the agony of their bullet-riddled bodies: on a still image that takes them away from death, allowing each of us to fantasize an alternative end to that which fate has foreseen. An end that goes beyond reason, also suspended by the "freeze frame", to express itself rather on a romantic and fairytale level: a miraculous victory in the final battle, with perhaps an escape to Australia in search of new adventures. An end therefore which, precisely because it is imaginary and imaginative, actually places them in the myth and makes them free from all constraints forever.