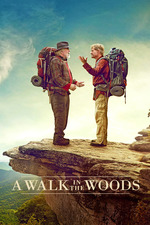 A Walk in the Woods

There are two films going on here in this adaptation of Bill Bryson's charming travelogue. One captures at least some of the spirit of that story, pitting two very ill-prepared elderly men (in the book, Bryson and his friend Katz are middle-aged) against nature in all its fullness — the world and their own alike. The other, which starts to show itself when the first runs out of steam, is just the crotchety musings of two annoyed, and annoying, old geezers trying to mould the world to their own designs.

The point where it crosses from one to the other is hard to discern, but you'll know when you've crossed it, when the quick wit of the first half gives way to the lazy misogyny and self-satisfied 'humour' of the latter. By then, Robert Redford is clearly sleepwalking through proceedings; Nick Nolte at least keeps up his end as the recovering alcoholic who looks like he might have spent more than a few nights under the stars before this Appalachian Trail misadventure.

A Nightmare on Elm Street: The Dream Child

A Nightmare on Elm Street 4: The Dream…