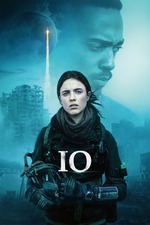 There’s no getting past the fact that IO is pretty much a rejig of Z for Zachariah mashed up with Silent Running, with bits ’n’ bobs from Blade Runner, The Martian and others, some smatterings of cod philosophy, and an unearned ambiguous ending. Its execution screams ‘too many cooks’ — the distraction of disembodied voices throughout the first act; the bluntness of its references: the bee/hive metaphor, the characters named ‘Elon’ and ‘Walden’, the target marketing (STEM is hot, tattoos are in — let’s slap ‘em together!).

More subtle is its underlying theme of toxic patriarchy: the young woman protagonist (Margaret Qualley, daughter of Andie MacDowell) whose fate is tied up in the hands of a distant lover (an unseen Tom Payne) who demands her presence yet puts his own destiny first, and the mysterious stranger (Anthony Mackie) whose actions, while apparently well-meaning, still condescend and reinforce the saviour-victim dynamic. It’s this that sets it apart from the usual straight-to-Netflix movie fare even when, on the whole, it’s not entirely convincing.