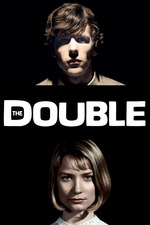 Richard Ayoade does Terry Gilliam in this Kafkaesque adaptation of the Dostoevsky story, with mixed results. It's well directed and beautifully composed, if perhaps too indebted to Gilliam's Brazil in look and feel - though hard to condemn that too much when it's an obvious tribute, to that and 1984 (the film of the same year) and the Eighties in general (or rather, the peculiarly British experience of the time; think Look Around You or Garth Merenghi's Darkplace). It's also a comedy of the awkward Larry David school, which is great if you like that sort of thing, but excruciating if you don't (I'm in the latter camp). Still, it improves as the plot unfolds, with a satisfying conclusion that I can see as disappointing or even infuriating to others. As for the cast: leads Jesse Eisenberg and Mia Wasikowska may be an acquired taste, but they and the weird world they're in are buttressed by an array of colourful cameos, from Wallace Shawn to J Mascis (what?). The good made the bad bearable for me, but your mileage may vary.