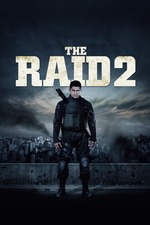 I wanted to like this one more than I did, as I quite enjoyed the original. And I appreciate that writer/director Gareth Evans tried to do something different: a repeat of the first film's side-scrolling beat-'em-up plot would've been a waste of time. The Hong Kong/Yakuza gangster flick direction was a good way to go in terms of story, and those dramatic elements work very well, even if the plot is needlessly labyrinthine.

But it's far, far too long (should be closer to 90 minutes, not two-and-a-half hours!) and the ultra-realism of the violence and gore tips the expertly staged fight scenes and general action from thrilling to grim. By the climactic duel in the kitchen (it's in the trailer, no spoiler), it was just washing over me; I didn't feel excited or invested, more exhausted - with a thousand-yard stare.