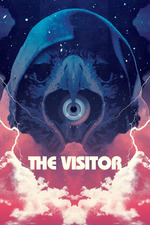 You probably wouldn’t expect an Italo-horror cash-in on the 1970s craze for demonic progeny (The Exorcist, The Omen) and young women with supernatural powers (Carrie, The Fury, etc) to have much identity of its own. And especially not when its biggest set pieces betray an obsession with Hitchcock’s The Birds. But The Visitor’s deeply strange story, rooted in a sci-fi interpretation of Abrahamic religious myth, stands apart from the typical rip-offs of the day.

Directing a cast of probably-slumming-it Hollywood legends like Shelley Winters, John Huston, Glenn Ford and Sam Peckinpah, plus a soon-to-be genre regular in the great Lance Henriksen, Giulio Paradisi (working here as Michael J Paradise) imbues this pastiche with a such an exciting sense of style and composition, and a thorough feeling of weirdness, that it’s little wonder why it’s become a cult favourite.

Just try to ignore the unfortunate orchestral funk motif for the titular character, which is very much at odds with otherwise mesmerising (and remarkably contemporary) synth-drone soundtrack.