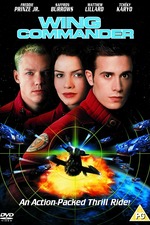 OK so it’s bad. The plot is the epitome of derivative, the leads are poorly cast and directed, it looks decidedly ropey when its opts for CGI over practical effects. The aliens look pants and should’ve been scrapped. All of those things. But hear me out.

The production design is really something. It’s got that weathered, lived-in look that Adam Savage would die for. It makes the most of its RAF hand-me-downs for a distinct take on the space fighter. And the submarine-style interiors were a smart choice (the presence of Jurgen Prochnow isn’t the only thing that inspires ‘Das Boot in space’). And come on, it’s got two Star Trek connections (David Warner and yer man out of Enterprise) not to mention Mark Hamill basically playing a version of R2D2. And maybe the first bullet time sequence before The Matrix. Those qualities should bump it up in anyone’s estimation.

In the Shadow of the Moon

A Bridge Too Far