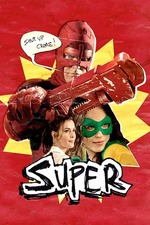 I have no idea what James Gunn was smoking, but it must have been some wild shit.

Anyway, movie was fun, it's obviously very flawed and the whole running after a girl that left you and that doesn't want you back is a pretty shit plot point, also pretty sure he got raped?Yeah, it's all over the place and it's very dark and...I have no idea what to call this, but it's sorta original?It's sorta okay and it was funny, above average and it really shows how much James Gunn evolved, and his humor (but that's a given)

I highly recommend watching this movie if you're a fan of James Gunn or if you're a fan of fun movies, don't watch this if you want a real story that takes itself too seriously. Geez this is a lame review, I really just want people to know this movie exists. This movie fucking exists, Kevin egg eating Bacon, Rainn murderer Wilson, hyped up rapey Ellen Page.

This movie shouldn't exist, but it does, watch it.