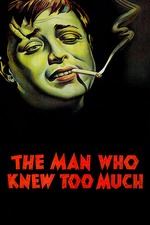 Fun, eccentric, and frenetic thriller that's almost bursting at the seams with Hitchcock's creative energy. He's not quite able to focus it all into a satisfying whole but there's a chaotic irreverence here that's missing from his later American films.

This film quite literally hits the ground running, or skiing, and doesn't stop for a brisk 75 minutes; however, the breakneck pacing causes certain elements of plot, character development, and suspense to suffer as a result. It ends up being an entertaining but unbalanced ride in which you're not rooting for the villain but not really rooting against him either. That's because of: (A) Peter Lorre, who completely steals the film, and (B) the script spends little time fleshing out the main characters and their dilemma.

Lorre is magnificent here, playing one of the most nonchalantly threatening villains ever. He's effortlessly cool, with his scarred face and white streak of hair, and unfailingly polite, he sincerely apologizes after hitting our hero. He also strikes the perfect balance between quirk and menace that the film calls for. No one else measures up, for better or for worse, and his performance drives the picture.

Hitchcock seems to have discovered all of the elements needed for a perfect thriller but he's still figuring out how to utilize them in the most effective manner. It's still fascinating to see him at play, and speaking of play, how could I forget about the chair-throwing scene?! It's one of the craziest fights I've ever seen and it just erupts out of nowhere. If this kind of lunacy isn't what movies were invented for then I don't know what was. Only a churlish philistine would say otherwise.