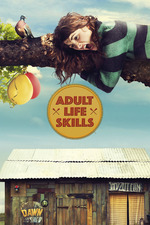 I really really loved this.

Adult Life Skills is a really enjoyable quirky British indie flick from first time director Rachel Tunnard. The divine Jodie Whittaker stars as Anna, a young woman fast approaching 30 who is clearly existing rather than living after the death of her beloved twin brother. Her bereavement is handled with a light, deft touch that remains convincing but never depressing to the audience, thanks to her desire to relive the eternal, eccentric youth she shared with her brother, making silly videos for their own amusement and living in the shed at the bottom of her mother's garden.

There have been many films about the arrested development of male characters so it's refreshing to see one told from the female perspective - and there's a delightful three generations of women living at home together and at the centre of the story thanks to Lorraine Ashbourne and Eileen Davies as Whittaker's mother and grandmother respectively. Tunnard imbues her debut film with the spirit and distinctive style of her leading character, played brilliantly by Whittaker, and I look forward to seeing what the director comes up with next. I could happily just watch her filming Jodie Whittaker's bickering thumbs for 90 minutes.