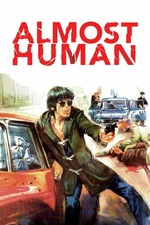 By now, the MO of the Filoni, the popular film cycles in Italian cinema, are well known. Filmmakers operating in genres such as the Spaghetti Western, the Giallo, Mafia thriller or the Poliziotteschi, look towards a film or films that have done well in the US and try to emulate them with a familiar repertory of actors including homegrown talent and aging Hollywood stars for a quick turnaround and a good profit at the booming Italian box office. Often times, the end result was as formulaic as such exploitation suggests. At others, they were good films in their own right that kept the Filoni thriving and stand now as great examples of their genres. And sometimes, they hit upon a classic that can easily stand head and shoulders alongside the film that inspired it. In some cases, it can even better it.

In the case of Almost Human, a 1974 Poliziotteschi from the prolific Umberto Lenzi, the inspiration is Don Siegel's Dirty Harry from three years earlier. Taking its cue from Scorpio, the repulsive psychotic serial killer of that movie, Almost Human concerns Guilio Sacchi (Tomas Milian) who we meet at the start of the film as a jumpy low level hood whose sole responsibility during a bank robbery is to drive the getaway car. Unfortunately when a police officer happens upon Guilio and the parked vehicle and asks to see his licence, Guilio panics and shoots the officer dead. A chaotic getaway ensues and Guilio is later badly beaten by gang leader Majone for the panicked behaviour that led to such reckless homicide.

At this point, some films might follow Majone as he tries to keep the heat off his criminal operations that the murder of a policeman will inevitably bring. It's conceivable that Guilio could be, in any other film, a minor character whose punishment means his exit from the narrative. But Italian cinema was reflecting the concerns of the day, a turbulent period in society known as the Years of Lead, where violence was seemingly an everyday occurrence. As a result, filmmakers wanted to explore a senseless evil that could explain such events and Milian's Guilio Sacchi is arguably the poster boy for senseless evil in the Poliziotteschi genre. There really is no one more despicable, more reprehensible, more sleazy than this proto-Liam Gallagher look-a-like who, from one simple hot-headed act, discovers a taste for sociopathic crime. Almost Human may have been influenced by Dirty Harry, but the levels of depravity it subsequently explores arguably owes more of a debt to Kubrick's A Clockwork Orange, whilst at the same time pre-empting De Palma's Scarface.

In realising that his lack of compunction regarding sickening violence can be an asset, Guilio sets out to become Milan's gangster number one. Recalling the real-live scandal of the Getty kidnapping from the previous year, Lenzi's film depicts Guilio hitting upon the idea of kidnapping the beautiful young socialite daughter of a wealthy businessman and get rich from the ransom he intends to collect. In doing so, Guilio assembles a small gang of younger or simply impressionable accomplices who will go along with his schemes, including Ray Lovelock's conflicted Carmine, and begins to mercilessly kill anyone and everyone who stands in his way. As the bodies start to pile up, Guilio alerts the frustrated attention of Inspector Grandi (the stony-faced Henry Silva, playing against type as the lawman here) who is beginning to realise the limitations of the Italian justice system.

Almost Human is a rattlingly good thriller that boasts one of Milian's finest performances. He would subsequently play another skin-crawling villain for Lenzi the following year in Rome, Armed to the Teeth (with the added grotesquery of a physical deformity in the shape of a hump on his back!) but it is Guilio Sacchi that is the most impressive. Of course, being the exploitative 1970s, these Filoni weren't shy in approaching nudity and misogyny and were often dismissed as reactionary, but despite these (purposefully) uncomfortable sequences, there is much to enjoy in this powerful and bleakly uncompromising thriller, including an adrenaline pumping score from Ennio Morricone.