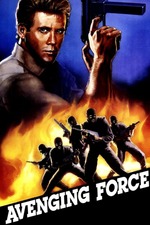 Cannon loved a movie franchise. Following the success of Chuck Norris vehicle Invasion U.S.A in 1985, they set about making a sequel the following year. Except this is a sequel to Invasion U.S.A in the same way that any Django film you'd care to name is a sequel to the 1966 spaghetti western - the film essentially just co-opts the name Matt Hunter. For a start, leading man Chuck Norris wasn't keen to return to the role and so Cannon offered it to the man they were moulding into the new action hero for the '80s, Michael Dudikoff. Secondly, the backstory and characterisation of Hunter as written by British actor James Booth (who also co-stars as Hunter's boss Admiral Brown) bears no relation whatsoever to what we had seen in Invasion U.S.A; in that earlier film, Hunter was a loner living out in the Everglades. Here he's bringing up his little sister with the help of their grandfather.

Booth's storyline makes precious little sense either. It's all about a rabid far right terrorist organisation called The Pentangle who, for sport, hunt their enemies out in the woods and swamps, then brand their bodies with the mark of the pentangle and leave them for the authorities to find. Riiight, and this is a secret organisation?!

So what we basically have here is Cannon's typically nonsensical homage to The Most Dangerous Game easily one of the most emulated films in cinema history. What sets it apart perhaps is the many uncompromisingly mean spirited touches Booth brings to his story. Not only are The Pentangle keen to turn Hunter's little sister into a child prostitute for their perverted cronies, they're not above killing the children of Steve James' would-be senator either. Being an Englishman, Booth approaches the lunatic fringes of American patriotism with a little more contempt, bite and satire than one might expect from your average Cannon movie. John P. Ryan's chief villain Glastenbury gets to spout the kind of mindless racist bollocks that got Donald Trump into the White House.

It's all bonkers of course, overlong and a little too po-faced to be truly enjoyable. Plus Dudikoff was always a bit of a charisma vacuum. Steve James would have made a better lead to be honest. But hey, who doesn't want to see a load of racists bastards get theirs eh?