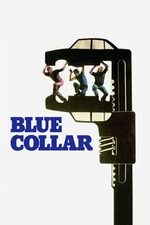 There aren't many political films from America. They make liberal movies absolutely; those which allude to corruption at high levels that are infused with a message that such a cancer - which is more often than not dragged kicking and screaming into the light by a whiter than white crusader - goes against the very principles of the land of the free. But genuine state of the nation social realist pieces about the working class being fucked over are very rare. Blue Collar is one of them, and its unashamed, honest Marxist stance probably explains why it is so little known.

In a previous review I compared Blue Collar to Boys From the Blackstuff, which arguably highlights the lack of comparative materials on offer Stateside. Like the very best in British and/or European political social realism, Blue Collar embraces the grimy, authentic, unjust and despairing circumstances of the working classes. Blue Collar's spirit is in its very title and in Smokey's (Yaphet Kotto) prophetic words; "They pit the lifers against the new boys, the young against the old, the black against the white. Everything they do is to keep us in our place" For a country whose much cherished American Dream rests on the notion that anything is possible, this is a bitter truth hard for many to swallow. But it is a truth nonetheless.

This is a film that I appreciate more each time I watch it and I think that that's because it sadly becomes more and more topical with each passing year. A film about the oppression of the working class from 1978 should date, but unfortunately nothing has changed in the capitalist system because it suits those with power to keep it so. There's something incredibly real and downbeat about the self-defeating act of three Detroit auto workers (Richard Pryor, Harvey Keitel and Kotto) robbing their union, an organisation there to defend and fight for their rights, but they equate it with 'The Man' and are proven right when they unwittingly stumble across its high-level corruption. Ultimately, with no one to turn too, they are manipulated to turn against themselves.

The beauty of Blue Collar is that the audience is with these characters every step of the way, meaning that we don't realise how deep the film gets until they are in deep waters themselves. These tonal shifts tend to confuse and alienate some audiences, though anyone familiar with the British/European traditions of such political movie making (think Ken Loach) will take them in their stride. However, much of this confusion among audiences was arguably brought about by a publicity campaign that seemed to sell the film as a showcase for Richard Pryor, the comedian. Blue Collar features an outstanding performance from Pryor, arguably his finest as an actor, with a stand out sequence being set on his porch near the conclusion of the film - with words that are just as relevant - perhaps even more so - now than they were forty-one years ago. But it's important to remember that Pryor's more than matched by his co-leads; Keitel gets to remind us just how great he was at portraying a sympathetic everyman figure before A-lister status led to his typecasting as more dangerous and sinister individuals, whilst Yaphet Kotto has a character here that is finally worthy of his incredible presence and acting chops. I don't say this enough, but I fucking love Yaphet Kotto.