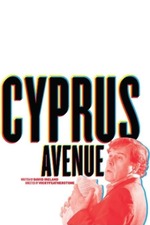 A potent reminder that bigotry may be something to be laughed at, but it is also equally something to be fearful of, David Ireland's critically acclaimed, award-winning stage play Cyprus Avenue tells the story of Eric, an Ulster Protestant who believes that his five-week-old granddaughter is Gerry Adams.

A tremendous, electrifying performance from Stephen Rea as the madly deluded Eric takes us from furrowed absurdity to savage, unimaginable actions. Filmed on the stage of the Royal Court by Vicky Featherstone, when the play takes its inevitable, shocking and terrifying turns, the camera captures the reactions of the audience in the front row. They gasp, look away and appear truly traumatised. Some even seem incapable of looking at Rea, and who could really blame them?

Ireland's language is wittily florid, none more so than in the introduction of the loyalist paramilitary Slim who delivers at length a cineaste's critique of the filmography of Ron Howard and bemoans the lack of Protestant roles for Tom Cruise. But this richness or the sharp timing as it turns from scabrous black comedy to blistering polemic and edge-of-the-seat drama doesn't detract from the piece's central message; a study of an entrenched, stuck-in-the-past prejudice and the paranoiac fear of loyalist identity being threatened by what they believe Gerry Adams, republicanism, Catholicism and progress represents.

A remarkable, one of a kind piece of theatre for those with a strong constitution to step aboard such an emotional rollercoaster.

A Life at the Mill

Nature of the Beast