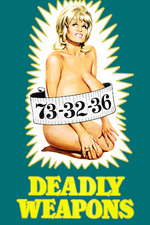 In which Chesty Morgan smothers people to death with her 73" bust to the sound of ominous thrashing guitars and thunderclaps. A genuine killer cleavage! One of her victims even looks a little like Dr Hook's Ray Sawyer, complete with eyepatch and luxuriant '70s 'tache!

As you would expect from this slice of softcore exploitation, Doris Wishman gives audiences plenty of close-ups of Chesty Morgan's pendulous breasts, but she also gives a seemingly equal amount of close-ups to the carpets and rugs her cast walk upon. It's nice to know that there's a film out there that doesn't just cater to the big boob lovers, it's representing the carpet fetishists out there too. Axminster and Wilton pervs - Wishman's got you covered!

Also, help me out here girls; when you're running the bath in the morning, do you stare into the mirror for an age whilst copping a hold of your boobs and baring your teeth in the kind of grimace that suggests you're remembering the costly gas bill that the postie's just delivered? No? Well, that's what Chesty does here, at least until Wishman presumably gives her another direction off-camera, whereupon her eyes dart off to wherever the sound has come from and she drops her massive hooters like they're hot.

Anyway, this was the first of two films Wishman made with Chesty Morgan. Despite its central hook, it's not as silly as the follow-up Double Agent 73 (which for those not in the know saw Chesty portray a spy who has a camera implanted into her boobs so that when she kills her targets she can take photographs for her superiors to study. Hmmm) which marks it down a little in my estimation.

Fake News And How To Evade It