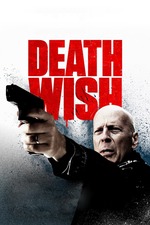 Anyone who has followed me for some time knows that I am not a big fan of remakes. My line of thinking is that if a film was good first time round, why try to improve upon it? However, as anyone who has read my previous reviews of the Death Wish films (or indeed any film directed by Michael Winner) will also know, I'm not at all precious about them. Which is why I seem to be in something of a minority here when I say I was really rather impressed by this.

The only thing that I was tentative about going in was Bruce Willis. Whether you love or hate the original films, there's no denying that Charles Bronson was iconic in the role of Paul Kersey, a character he is arguably synonymous with. It would be a big ask for anyone to step into Bronson's shoes and, with Bruce Willis long past his sell by date, I feared the worst.

Whatever happened to Willis? Remember when he was renowned for his boyish smirk and the twinkle in his eye? Remember when he looked like he was having the most fun possible in his movies? Those days are now long gone, as evinced by the fact that this is arguably his only major release since 2013's disastrous A Good Day to Die Hard. Willis continues to be problematic here; the opening sequences, which are supposed to depict a happy and contented family man and medical professional, are spectacularly misjudged by him. He seems bored here, sleepwalking his way through these scenes in a manner which suggests the rot that will later befall his character has already long since set in. Thankfully, his performance comes alive when Kersey turns vigilante - 'The Grim Reaper' as the citizens of Chicago take to calling him - and we get to see some of that old spark; but surely this is the point when his character should appear a little dehumanised and robotic, not earlier?

Another fear I had was in the choice of director, Eli Roth. I am not a fan of gruesome, gory horror and I did wonder if, with Roth in the chair, we were going to get a really explicit, stomach churningly violent thriller, combined with a similarly unsavoury approach towards its female characters that was the signature of Winner's films. Whilst there are admittedly some very bloody sequences that will make you wince it's fair to say Roth keeps these impulses in check, whilst he totally avoids the same misogynistic mistakes that Winner would so often make. Instead, he delivers a straightforward and engaging popcorn thriller. This is a positive for me, but I can understand the criticism from some quarters that the film takes no risks in delivering anything more up to date or all that distinctive from the original. Whilst Joe Carnahan's script makes some changes - Kersey is a doctor here (which adds an extra dimension given the Hippocratic oath of 'first do no harm') and he has a brother played by Vincent D'Onofrio, always good to seem him - it's fair to say that this is a more or less straight remake of Winner's 1974 film. A far bolder take would have been to adapt the original novel by Brian Garfield and make a more left field casting decision for Kersey. For example, when the rights to Garfield's novel were originally bought by producers Hal Landers and Bobby Roberts, their first choice for Kersey was Jack Lemmon. Imagine how this remake would have played out if they cast an actor with a background in comedy - Steve Carell say - to portray such an unlikely vigilante figure - though, I imagine if Roth had the nerve to do that, the knives really would have been out for this one!

Of course, one of the reasons why the knives were out for this remake lies in the fact that, with mass shootings are now tragically a ubiquitous part of American society, any film that appears to glorify guns and vigilantism will be seen as offensive and insensitive. However, as mass shootings have been commonplace for so long now in the US, I doubt that there would ever truly be a right time for a film like Death Wish to come along. Brian Garfield, speaking in relation to Winner's film, glumly remarked "They made a hero out of him. I thought I'd shown that he'd become a very sick man" Roth's film does try to convey this sickness, and how distant from civilised life Kersey is becoming, but it's not adequately handled enough. That said, I wouldn't necessarily call the film pro-gun and both Roth and Carnahan appear to have fun skewering this easy consumerism in weaponry, with brash and cheery ads hosted by a bimbo promoting the latest deals seemingly directed with a bemused shake of the head.

Ultimately, as a shoot 'em up, Death Wish provides solid entertainment, whilst its sense of good overcoming reprehensible evil is a satisfying one, and that's all you can ask for really.