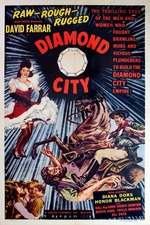 For the British cinemagoer, Westerns were hugely popular films. Unfortunately, this meant that American movies were often more successful at the box office than homegrown productions. Determined to cater for their public, the British film industry began to dip its toes in the traditionally American genre in the late 1940s. They wouldn't be so bold as to try and set their horse operas in the US (though that would come a little later with the perversely entertaining The Singer Not The Song), instead they sought inspiration in the far flung corners of the empire.

1949's Diamond City tells the story of a man determined to uphold the law in South Africa's diamond mines. It's a pseudo-western that trades on the familiar riffs of Klondyke sagas to please its audience. Based on the true story of Stafford Parker, who was elected president of the Diamond Diggers Republic in 1871, it stars the stolid and genial David Farrar as our sheriff (in all but name) hero in the white hat, whilst the black hat role is taken by a swarthy, barrel-chested Niall MacGinnis as a conniving diamond merchant. A young Honor Blackman as the demure daughter of Mervyn Johns' missionary and an even younger Diana Dors as a blousy, heavy-bosomed barkeep provide romantic distractions for Farrar's lawman.

Shot in South Africa and at London's Denham Studios, Diamond City manages to recreate that sense of the Wild West upon the veldts of South Africa thanks to strong production and set design from art director George Provis and a plethora of supporting artistes providing a bustling background spectacle. Unfortunately, the film falls down when it comes to the actual story. The stakes never feel particularly high or involving, whilst the characterisation never really transcends the familiar acting style of the day of hale and hearty good guys or the hissable villains.

This trend for British Westerns continued with the Australian gold rush drama Eureka Stockade from the same year, but it wasn't until the birth of the spaghetti western in the 1960s that these genre pieces stopped being the sole domain of Hollywood and became credible successes in their own right.