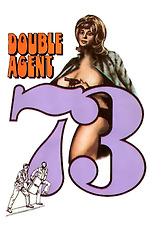 Why, in his dazed, dying moments, does the drunk bloke that she's tricked into believing she's the girlfriend of, end up seeing Chesty's ginormous unfettered boobs and navel when the scenes either side of this clearly shows that she's still wearing her (very restrictive) bra and (hideous) outfit? I've watched this film more times than I'd care to name (hey, we didn't have the internet in the 90s, OK? It was either stuff like this on the Bravo channel or searching around in bushes for a tattered copy of Razzle) and that lack of continuity still irritates me.

Yes, I am that person.

Still, we shouldn't be too hard (fnar fnar) on this. It's the one death scene where Ms Morgan shows a bit of life. Normally, she plods her way through each sequence, heavy boobs swinging like pendulums and features either contorted painfully or utterly blank and taciturn. Here, once she's dispatched the man who looks suspiciously like a young, slim and moustachioed George Wendt, and taken his photo by hitching up her massive mammary (cue shutter sound effect and flash!) she does a cute and cheeky little curtsey-like move, popping her hip out over his prostrate form. It's arguably the one time she shows a teensy bit of energy and fun in her performance.