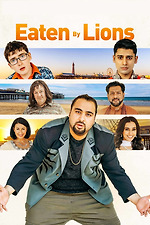 If you're looking for a fun British comedy that's packed with more than its share of laughs then Eaten By Lions is definitely worth a watch.

This multicultural comedy from the north of England may have a grim premise (Two young lads are suddenly orphaned when their sole guardian, their gran, passes away. Their parents having previously met their fate when their hot-air balloon crashed in a safari park, hence the title!) but it's as sunny and as cheeky as its seaside setting of Blackpool, as Asian teenager Omar (Antonio Aakeel) leaves Bradford's Buttershaw (once home of Rita, Sue and Bob Too's Andrea Dunbar; clearly an inspiration for the film) to go in search of his biological father, with his wisecracking, disabled half-brother Pete (Jack Carroll) in tow. Along the way they meet an assortment of characters like Vicki Pepperdine's middle-class Brexiteer housewife and her meek hubby played by 'The Actor Kevin Eldon', Johnny Vegas' lonely B&B owner ("There's no hassles at The Castles"), and an inept end-of-pier fortune teller played by Tom Binns, before they finally join the dots that leads them to a well-to-do Asian family. But which of the two sons - Nitin Ganatra's family man or Asim Chaudhry's overgrown adolescent - is the daddy?

The screenplay by director Jason Wingard and David Isaac is a sprightly one that carries on the fine, naughty-but-nice traditions of northern multicultural comedies and is enhanced by the fact that it allows its cast of professional comics (Chaudhry, Carroll, Vegas and Binns) to provide additional material. This means that you're never far away from a killer line and a good chuckle. Unfortunately given the three-act structure, the inevitable fallout occurs that threatens to destroy the half-siblings relationship and things take a (literal) turn for the messy as the film does start to go into a nosedive that it never truly recovers from. A real shame, because up until that point it was all plain sailing.

Nevertheless, this is a refreshing big screen Britcom which, unlike many of its stablemates, isn't trying to achieve the feelgood factor by emulating the tropes first seen in The Full Monty. Eaten by Lions is its own thing; it may not all work, but you have to applaud its originality. And you will laugh - sometimes, that's enough, right?