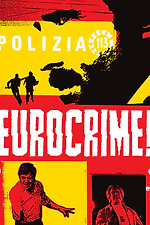 Let's get it straight, this is a cheap movie from Poliziotteschi fan Mike Malloy, but it is a deeply affectionate one.

The big problem for me is that there is a gaping hole in this movie - my man Tomas Milian is nowhere to be seen! It's bad enough that Malloy couldn't get him as an interviewee for this, but it's ridiculous that in a 126 minute retrospective, the genre's biggest star isn't even mention until 114 minutes in! That's just criminal. Eurocriminal.

Nevertheless, I'd recommend this for Poliziotteschi fans, even if they won't really learn anything, and to newcomers to the genre, who will definitely want a pen and pad handy to make a note of some titles. In that respect, this film is not unlike Mark Hartley's Not Quite Hollywood or Electric Boogalo, doing for Poliziotteschi what those films did for Ozploitation and Cannon Films. But the budget and vision Hartley's films have are not here in Malloy's, which is visually dull, relying on bogstandard talking head shots and some seriously shonky animation that wants you to think it's charming rather than threadbare.

I want to make special mention to the fact that the Easter Island statue that is Henry Silva actually looks really good for his age here, which was 83 at time of filming a decade ago, whereas the once beautiful Franco Nero looks ridiculous with his Axminster sample weaved into his scalp and dyed facial hair. How did that reversal happen? Still, the real ridiculous figure here is Antonio Sabato puffed up in pink and brimming with ill founded arrogance.

Oh and no, Joan Collins is not American. Where was your fact check there, Malloy?