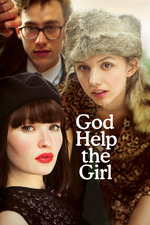 I put off watching this for so long. A film the Guardian called 'a big smeary mess of twee' made me cautious; would this Scottish-set musical be a hipster annoyance or would it be a whimsical little gem?

Actually in the long run, it is neither. It's not as irritating as you may think, but Belle & Sebastian's Stuart Murdoch's inexperience as a film maker means this is far from being a gem and that's despite the strong, achingly beautiful trio of Emily Browning, Olly Alexander and Hannah Murray, and - as if especially included just for me - Radcliffe and Maconie, Josie Long and a brief shot of the divine Harriet Wheeler in the opening credits. Still, I have to commend Murdoch for trying to pull something off and on occasion almost achieving, as well as making a defiantly, most determinedly indie feature. It's beautifully shot, and I mean beautifully but it's not very cohesive as a whole and, at 110 minutes, this is quite over indulgent. It just goes on and on and onnnnnnnn. 80 would have been the perfect running time for a production that seems to be a constant tandem chase between charming and over-sweet quaintness. At 80 minutes, this would have been tighter, neater, more on the nose, less like a string of pop videos and it wouldn't have outstayed its welcome. All things a film maker learns from experience I guess.

In a nutshell, this is a noble but deeply flawed effort to mix Jacques Demy with Bill Forsyth and gains a generous three stars from me for its desire to do something different, its good cast, some standout beautiful scenes and the score, though in reality it's probably only a two and a half.