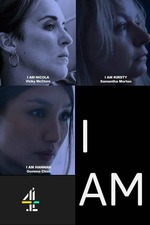 This quietly formidable series from writer/director Dominic Savage is one that looks at issues facing women today. The first episode, I Am Nicola, stars Vicky McClure and concerns the perils of a coercive relationship. The second is I Am Kirsty, which stars Samantha Morton and looks at women in poverty. Finally, I Am Hannah, starring Gemma Chan, explores the life of a modern single woman over the age of thirty. Alongside Savage, all three actors had a hand in creating and writing the episodes they appear in and improvising scenes.

The cunts at the Daily Fail already had the knives out for Samantha Morton's film some months ago when, clutching at their pearls and iron crosses, they lambasted her for a 'left wing rant' about austerity on The One Show. Their complaint, it seemed to be, was that Morton should not have been allowed to discuss the issue on the cosy magazine show, and she certainly shouldn't have compared levels of poverty today to those of Victorian times, all whilst wearing a Calvin Klein Dockers tee. I mean, how dare the beeb break with its pandering to the eternally unelected bigot Nigel Farage or its 24/7 hectoring of Jeremy Corbyn! To fight back, the Nazis rolled out 'historian' David Starkey to claim that what she said was offensive to Victorians, though there is no word as yet on how many Victorian men and women contacted the BBC to claim they were offended of course, on account of them all being long dead. However, what The Fail and their pet snob Starkey conveniently chose to overlook is the fact that every one of these films is based on a true story. I'd like to see them actually go and speak with the person Morton based her episode on - a single parent who turned to loan sharks and sex work to provide for her children - or indeed any one of the thousands of women who have been hit the hardest by the austerity measures of each Tory government since 2010. Because it is women who are the most affected, much like it was in the Victorian era. Honestly, we live in a society where people are eating out of bins and where children are living in shipping containers, and these right wing bastards still refuse to acknowledge there's a problem because it's all rosy in their Boris loving, Brexit voting garden where the grass is always redder whiter and bluer.

I'd say that of the three films, Morton's I Am Kirsty is the highlight, but that feels like I'm doing a disservice to the excellent work from McClure and Chan. I Am Nicola is actually based on a past relationship that McClure herself was in, and she brings it unnervingly to life alongside her co-star Perry Fitzpatrick, who had previously appeared opposite her in the This is England series. On the face of it, Chan's I Am Hannah ought to be the weakest of the three in that her story feels far less grave than the previous two, with Hannah in a much more secure and safe environment. However, this film explores the passive cruelty and unfairness that Hannah faces from a society (and her own body) that places a time limit on settling down and raising a family. The disapproving, judgemental looks she receives from other women, the heartache her situation incurs in her mother and the horrible preconceptions she faces from the men she meets on dating apps, who take one look at a woman who isn't quite ready to commit and believe she's only after a shag, are explored with similar, thought provoking insight. As a man myself, if I can take one thing from I Am Hannah it's the way Chan eloquently gets across the injustice women feel of being told, right from their teen years, that to get pregnant is the very worst thing that can happen to you, right up until they reach 35 when the whole thing is turned on its head and they're told instead that they have to get pregnant right now in order to be accepted by society.

Fake News And How To Evade It