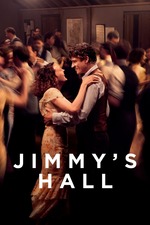 "It's still the same opposition, the masters and the pastors"

This passing remark in Paul Laverty's script for Ken Loach's latest film may as well be used to sum up the targets both Laverty and Loach have had in their sights since their collaborative partnership commenced almost twenty years ago. And I'm pleased to say they haven't lost their skill at hitting these targets yet.

Jimmy's Hall tells the true story of Jimmy Gralton, an Irish socialist who was deported from his native country without trial in 1933. His crime was to have built and established a voluntary run public hall in County Leitrim; a place for the community, for education and leisure - specifically dances that featured both traditional music and the jazz that Gralton had brought back from America.

Why was that a crime? Well back in the day the Catholic Church had the sole responsibility of educating the people and, fearful Gralton was teaching them the atheist communism he was so often accused of supporting, as well as losing out on money from such an operation (as an independent 'by the community for the community' led hall no schooling fees or rent was going to the Parish coffers) they resorted to desperate and violent measures to close down Jimmy's operation. There was also the small matter of Jimmy challenging the 'rights' of the landed gentry to kick families off their land at the drop of hat.

It's a thoughtful and powerful tale blessed by two incredibly good performances by Barry Ward as Jimmy Gralton and, as his rival, Jim Norton as Father Sheridan. Idealistic, poetic and incredibly clear it occasionally reminded me of something like The Grapes of Wrath, which is praise indeed. It would be a great shame indeed if this was, as rumoured, Loach's final (dramatic) film.