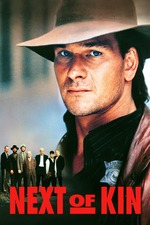 Michael J. Pollard steals this film out from under everyone's noses. I love how his acting style is to be completely apart from how everyone else chooses to play stuff. It's worth pointing out that this film boasts a cast made up of Patrick Swayze, Liam Neeson, Helen Hunt, Adam Baldwin, Bill Paxton and...um, Ben Stiller*, so Pollard's performing no mean feat here.

I'm not entirely convinced Next of Kin knew what it wanted to be though. There's a bit of Coogan's Bluff-style fish out of water action here, but it makes the mistake of concentrating on Patrick Swayze's cop rather than the more interesting outsider character of his unreconstructed hillbilly brother Liam Neeson, who heads to Chicago for revenge (well, it's Neeson, what else would he be doing?) following the death of their other brother, played by Bill Paxton. But there's also an attempt by director John Irvin (yup, the same Irvin who directed the BBC adaptation of Tinker Tailor Soldier Spy!) to lend the Appalachian Mountains scenes and its community the same kind of romantic, simple-living, stuck-in-time air that Peter Weir gave the film Witness, which is clearly a little more highbrow than everything else around it. When it does finally get to the action, a lot of it veers towards the comedic, with the Chicago Mafia proving particularly inept. All in all, it's a bit of a mess tonally.

It doesn't help that the story and overall narrative structure is a bit weak too. Paxton gets murdered by Baldwin and, because the family don't believe that the law that Swayze represents can get the justice they deserve, they send Neeson down to cause mayhem. However, when Neeson also comes a cropper, the entire family decided to leave the mountains to do the job. It does beg the question, why didn't they all just come down the minute Paxton was bumped off? It would have certainly been a much shorter movie! Unfortunately the film knows this and knows that its foundations are poor so it spends much of its rountime just aimlessly moving around until the inevitable climax, making what is a 110 minute film (an unnecessary lengthy running time anyway) feel considerably longer.

Also Swayze has a ponytail and all I could think of was this.

*Ben Stiller cannot do straight acting. He is utterly terrible at it. Just as well he moved into comedy really, even though his comedy hardly has universal appeal either.